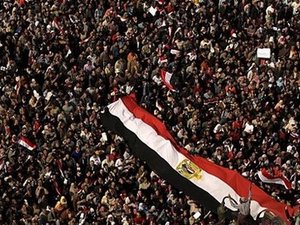 Egyptian President Hosni Mubarak could "respond to the people's demands by tomorrow," the secretary general of his ruling party told the BBC on Thursday, as protesters demanded the strongman's departure.

"I expect the president to respond to the demands of the people, because what matters to him in the end is the stability of the country. The post is not important to him," Hossam Badrawi of the National Democratic Party said.

"The right action in my opinion is to send a letter for constitutional amendments, to step aside and give the power to the vice president and to ask for early elections when the amendment is approved," he said.

"I don't think he will leave the country. He is a military hero, he has lots of good things that have been done, lots of mistakes too," he added.

"I think the general feeling of the people towards him is yes, they want him to step aside or down, but the Egyptian people are great people and I think they will do that with honor and respect to one of their military heroes."

Badrawi did not specify that he was referring to Mubarak stepping down, but a senior military officer, speaking on condition of anonymity, told Agence France Presse: "We are awaiting orders that will make the people happy."