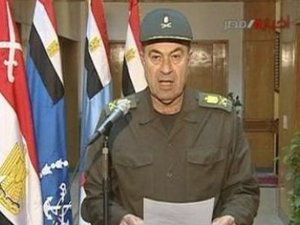 Egypt's military said Thursday it would respond to the "legitimate" demands of the people as President Hosni Mubarak's regime tottered in the face of massive nationwide protests demanding his overthrow.

It was not immediately clear if the announcement spelled the end of Mubarak's 30-year-reign, the central demand of hundreds of thousands of people who have filled the country's streets in the two-week-old uprising.

State television said the embattled president would address the nation within hours.

Egyptian television interrupted all programming to present footage of a panel of senior military officers, one of whom read out a statement described as "communiqué number one" of the Supreme Council of the Armed Forces.

"In support of the legitimate demands of the people," the army "will continue meeting ... to examine measures to be taken to protect the nation and its gains and the ambitions of the great Egyptian people," it said.

Prime Minister Ahmed Shafiq insisted, however, that no final decision had been taken and that the armed forces council was reporting to Mubarak.

A wave of anticipation swept through Cairo's Tahrir Square, the epicenter of the unprecedented wave of pro-democracy protests, as rumors spread among the hundreds of thousands of joyful, flag-waving protesters massed there.

Tens of thousands of Egyptian workers striking nationwide had swelled their ranks on the eve of Friday's Muslim day of prayers, when protest groups had urged millions to turn out in what could be the biggest show of defiance yet.

A security official confirmed union reports that thousands of employees in the public sector were staging strikes in the Mediterranean city of Alexandria, the canal city of Suez and elsewhere on the north coast and the Red Sea.

Union leader Kamal Abbas said that since nationwide rallies erupted on January 25 to demand an end to Mubarak's rule, "we have started to hear of the billions of dollars that officials hold in personal accounts.

"So many employees feel it is time to stand up and demand their rights."

Workers at Egypt's largest factory -- the Misr Spinning and Weaving textile plant, which employs 24,000 people in the Nile Delta -- padlocked the buildings and massed in front of the administrative offices.

"We are striking first of all to show solidarity with the protesters in Tahrir Square," one strike organizer, Faisal Naousha, told Agence France Presse. "We also want court rulings lifting the minimum wage to be implemented."

In Cairo, some 3,000 health workers marched to join the anti-regime crowds that have blockaded parliament and occupied Tahrir Square.

Around 100 lawyers in suits and ties and "revolutionary" youth marched to the Abdeen presidential palace near Tahrir but were stopped by the army, at which point they knelt in afternoon prayers at a crowded intersection.

"This is a legitimate revolution ... It is our right to bring down this corrupt regime," Mohammed Mursi, one of the lawyers, said.

The strikes broke out as both sides in Egypt's conflict toughened their rhetoric, with Vice President Omar Suleiman and Foreign Minister Ahmed Abul Gheit tacitly threatening to turn to the military to regain control.

"Long live Egypt! Down with Hosni Mubarak!" protesters chanted in the street outside parliament, now lined with makeshift shelters and anti-regime posters.

"If we don't die here we'll die in prison. I'd prefer to die here," said Attiya Abuella, 24, an unemployed graduate.

He said he was jailed last year for 60 days, spending hours with his wrists chained to the ceiling or naked in his cell, for taking photographs during legislative elections that were widely seen as rigged.

In Tahrir Square, volunteers have erected portable toilets in what has become a sprawling tent city with sound stages, food and flag vendors and a mobile phone charging station.

Hundreds of protesters from a run-down slum in the canal city of Port Said torched the police headquarters and burned police cars before storming the province headquarters for the second time in two days, witnesses said.

On Wednesday, the unrest stretched as far as the remote oasis of Kharga, where at least five people were killed and 100 wounded when security forces opened fire on demonstrators, a security official told AFP.

The United States is watching events with concern, pushing the regime to make rapid constitutional changes in the hope a transition to elected rule can take place without violence or an Islamist takeover.

CIA Director Leon Panetta said Thursday that if Mubarak steps down, he would likely hand over power to Suleiman, who has been holding talks with some opposition groups and protest leaders.