'A Tale of Two Cities' as Britain Marks Dickens Bicentenary 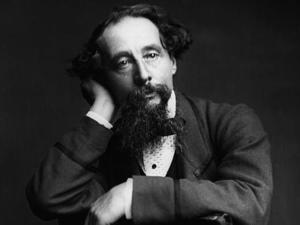 Britain marked the 200th anniversary of the birth of Charles Dickens on Tuesday with the laying of a wreath at his grave in Westminster Abbey in London and a street party in his native Portsmouth.

Prince Charles and actor Ralph Fiennes, who will star in the latest film version of Dickens' masterpiece "Great Expectations", attended the ceremony in Poets' Corner at the abbey, where Dickens was buried in 1870.

The congregation included what is believed to be the largest ever gathering of descendants of the Victorian novelist as well as representatives from the worlds of literature, film and theatre.

Fiennes, who will star as the convict Magwitch in the adaptation of "Great Expectations", read an extract from another of Dickens' greatest novels, "Bleak House".

An event was held simultaneously in Portsmouth, the port city on England's south coast where Dickens was born on February 7, 1812.

In a message read in Portsmouth, Prince Charles said: "Despite the many years that have passed, Charles Dickens remains one of the greatest writers of the English language, who used his creative genius to campaign passionately for social justice.

"The word Dickensian instantly conjures up a vivid picture of Victorian life with all its contrasts and intrigue, and his characterization is as fresh today as it was on the day it was written."

The heir to the throne and his wife Camilla also toured the Charles Dickens Museum, on the site of the writer's former home in Doughty Street, central London.

The royal couple viewed several of Dickens' original manuscripts with interest before Charles declared the handwriting to be "utterly indecipherable".

Dickens had asked to be buried at Rochester Cathedral in his beloved Kent in southeast England, but a public outcry led to him being placed in Poets' Corner, which hosts memorials to many of Britain's best-loved writers.

At a church service in Portsmouth, "Four Weddings and a Funeral" star Simon Callow, who has written a Dickens biography, read from "David Copperfield", which was first published as a novel in 1850.

The tale was inspired by Dickens' experiences as a boy working in a leather blacking factory when the family fell on hard times after his father was sent to the debtors' prison.

But by his mid-20s, Dickens was a literary star and his fame continued to grow.

In London, the culture minister Jeremy Hunt bought copies of Dickens works for all of his his cabinet colleagues.

Prime Minister David Cameron received "Hard Times" -- perhaps in a reference to the economic climate -- as well as "Great Expectations.

A 24-hour "read-athon" also took place in 24 countries, starting with an excerpt of "Dombey and Son" in Australia and ending with a passage from "The Mystery of Edwin Drood" in the United Arab Emirates.

Claire Tomalin, one of Dickens' leading biographers, said the author was an incomparable talent.

"After Shakespeare he was the greatest inventor of character. His characters remain -- even people who haven't read his work know Mister Micawber, Oliver and Fagin," she told Agence France Presse.

"I think he wrote his characters through their voices, and that is why they dramatize so well.

"He wanted to show that ordinary people were as interesting as rich, famous, grand people. He succeeded in that, and he was funny too, he made people laugh."

Aside from Dickens' prodigious output of articles and novels, he also helped to run and to finance a house for "fallen women", offering prostitutes a fresh start away from their old lives in a large house in London.

The ultimate goal was to send them to Australia to find jobs and start their own families.

Dickens also found time to father 10 children and as his fame spread, he embarked on lecture tours of the United States.