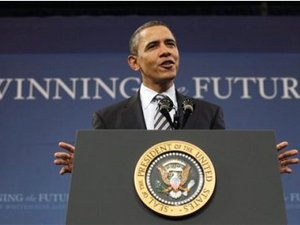 U.S. President Barack Obama declared Thursday the world was watching history unfold and a moment of transformation in Egypt, as reports said President Hosni Mubarak may be ready to step down.

Obama also directly addressed the young people of Egypt who have swelled massive crowds in Cairo, saying America would do all it could to ensure a genuine transition to democracy at an apparently pivotal moment of the crisis.

"What is absolutely clear is that we are witnessing history unfold. It is a moment of transformation that is taking place because the people of Egypt are calling for change," Obama said in the northern state of Michigan.

Obama also delivered his most direct endorsement yet of protesters who have held days of demonstrations demanding the ouster of Mubarak, amid raucous scenes in Cairo's Tahrir Square.

"Going forward, we want those young people and we want all Egyptians to know that America will continue to do everything that we can to support an orderly and genuine transition to democracy in Egypt," he said.

But he did not mention Mubarak, the Arab strongman who has been a staunch U.S. ally for 30 years, but has seen his regime teeter on the edge of collapse amid protest which provoked a foreign policy crisis for Obama.

Thursday's rhetoric from Obama, who has been criticized for not being more vocal in support of protesters as he sought to safeguard U.S. geopolitical goals, was reminiscent of the generational mood music of his 2008 election campaign.

Earlier, the United States scrambled to keep up with fast-moving developments.

Obama monitored breaking news updates on the jubilation and confusion in the Egyptian capital on television on Air Force One as he flew to Michigan and received regular updates from his national security staff.

CIA Chief Leon Panetta meanwhile caused a flurry of excitement by appearing to give credence to strong reports and rumors that Mubarak, due to speak to the Egyptian people on television later Thursday, would likely go.

But a spokesman later swiftly clarified that Panetta was referring in a congressional hearing to news accounts and not some classified and privileged information culled by the U.S. spy agency.

Aboard Air Force One, Obama's spokesman Robert Gibbs would not say when or whether the president had received information that Mubarak was on the verge of ceding power after days of raging street protests.

"We are watching a very fluid situation. The president is watching the same thing you are," Gibbs told reporters, adding he did not want to prejudge events.

Other officials declined to comment on multiple reports on U.S. cable television outlets and elsewhere that the Arab strongman could be preparing announce his departure later on Thursday.

But they stressed that Washington had all along pressed for an "orderly" and swift transfer of power by Mubarak in a process that would lead to free, inclusive and fair elections.

The president was briefed immediately before leaving Washington on the situation by his National Security Advisor Tom Donilon and was receiving further updates throughout the day.

Panetta's comments caused a stir at a meeting of the House of Representatives intelligence committee.

Asked about reports that the Egyptian leader was about to relinquish power, Panetta said: "I got the same information you did, that there's a strong likelihood that Mubarak may step down this evening."

But a U.S. official later told Agence France Presse that "the director was referring to press reports."

Panetta said if Mubarak did leave office it "would be significant in terms of where the hopefully orderly transition in Egypt takes place."

And the CIA director also said that it was likely that if Mubarak did go, he would hand over to his vice president -- and former intelligence director -- Omar Suleiman, who has close ties to the U.S. clandestine community.

Uncertainty and hope among protesters in Egypt was sparked when the military said it would respond to the "legitimate" demands of the people.

It was not immediately clear if the announcement spelled the end of Mubarak's 30-year-reign, the central demand of hundreds of thousands of people who have filled the country's streets in the two-week-old uprising.

State television said the embattled president would address the nation within hours.