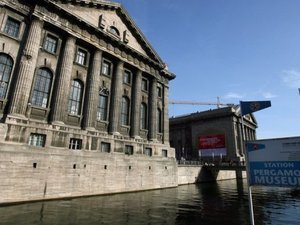 The Great Altar of Pergamon, a sculpted frieze dating from the 2nd century BC and one of Berlin's top tourist attractions, will be closed for repair work from 2014, the museum said Tuesday.

The Pergamon Museum -- which opened to house the Ancient Greek masterpiece in 1930 on Berlin's renowned Museum Island -- will undergo a complete renovation in several phases, between October of this year and 2019.

"Preliminary restoration work in the Pergamon Hall will likely begin in May 2014," the state cultural authority said in a statement.

"The main attraction on Museum Island will likely be closed to visitors from October 2014 for three years," it said, referring to the Pergamon altar.

German archaeologists discovered ruins of the altar between 1878 and 1886 and sent them back to Berlin based on an agreement between the German government and the Ottoman Empire. Its reconstruction lasted until 1902.

The most popular institution on Museum Island, the Pergamon attracted 1.3 million visitors last year, according to official figures published Tuesday.