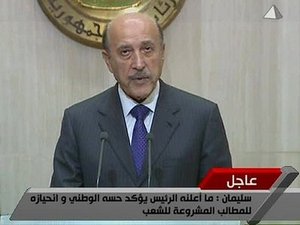 Egypt's Vice President Omar Suleiman on Thursday told protesters and strikers to head home or back to work in his first speech after Hosni Mubarak delegated presidential powers to him.

Suleiman told "the youth of Egypt, its heroes, go home and go back to your jobs" in a televised statement shortly after Mubarak made an address formally putting his former intelligence chief in charge of government business.

"This is a critical time which requires us all to unite," Suleiman said.

Protesters in Cairo's Tahrir Square had already reacted with fury when Mubarak failed to announce his immediate resignation after two weeks of nationwide rallies calling for his ouster, and few appeared to be paying attention to Suleiman's address, according to an Agence France Presse correspondent.

"Change has begun ... The door is still open for more dialogue," he said.

"I am committed to do all it takes to ensure a peaceful transition of power based on constitutional provisions.

"The time has come to start work. We will all work as one team," he said.

"I call on all citizens to look to the future, to make this future promising and full of freedom."

Suleiman reiterated his message against anyone with "foreign agendas," who he has previously said were to blame for deadly clashes last week.

"I will not allow those who have foreign agendas to be among us," he said.

Hopes had run high that Mubarak would step down immediately after the military leadership had announced hours earlier that it would move to ensure the country's security and see that the people's "legitimate" demands were met.

But by the end of his speech the 82-year-old Mubarak remained president.