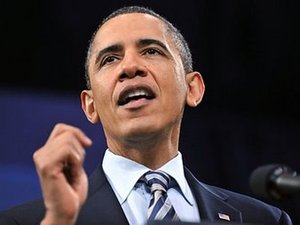 Bristling with impatience, President Barack Obama on Thursday openly and sharply questioned whether Egyptian President Hosni Mubarak's pledge to shift power to his vice president is an "immediate, meaningful or sufficient" sign of reform for a country in upheaval.

Without naming Mubarak, Obama issued a written statement that criticized the leader for not offering clarity to his people or a concrete path to democracy. He called on Egyptian government leaders to do so, declaring: "They have not yet seized that opportunity."

Obama's comments came after Mubarak, in a televised speech, refused to step down despite intense speculation that he was on the brink of ouster. He said he was delegating powers to Vice President Omar Suleiman, yet Mubarak remained president and defiantly said he would so until a successor was elected to replace him in September. Protesters were shocked, saddened and enraged.

At the White House, Obama scrambled with his national security team over how to respond to a speech that had left many surprised and even baffled. In his statement, Obama challenged Egypt's leaders to plainly explain what the new changes mean and how they would lead them to the freedoms or opportunities that have driven enormous crowds into the streets since late January.

"Too many Egyptians remain unconvinced that the government is serious about a genuine transition to democracy," Obama said, "and it is the responsibility of the government to speak clearly to the Egyptian people and the world."

Still, analysts and even U.S. officials themselves acknowledge the White House has limited power to shape what Egypt does.

Obama devoted most of statement to the familiar calls by his government for Egypt to respect the rights of its people and to immediately negotiate a path to free elections.

The fast-changing developments capped 17 days of mass anti-government protests, the strongest challenge ever to Mubarak's nearly 30 years of authoritarian rule. The White House has warned Egypt's leaders that they should not expect those protests to go away until they respond appropriately; at issue are deep concerns over repression, poverty and corruption.

The events seemed to catch many by surprise.

Before Mubarak's speech, CIA Director Leon Panetta told Congress there was "a strong likelihood" that the Egyptian leader was on the way out and could step down as early as Thursday night. Egypt's military had assured protesters that Mubarak would meet their demands.

Yet the Egyptian president stuck to a framework for reform that protesters have roundly rejected out of fear that it will mean only cosmetic change.

Earlier in the day, as anticipation grew by the hour, Obama said that what the United States wanted was transition to democracy in Egypt that was not just orderly but "genuine."

"What is absolutely clear is that we are witnessing history unfold," Obama said at the start of an overshadowed economic event in Michigan. "It's a moment of transformation that's taking place because the people of Egypt are calling for change."

In his address on state TV, Mubarak showed the strategy he has followed throughout the days of upheaval. He has made a series of largely superficial concessions while resolutely sticking to his refusal to step down immediately. And on Thursday, he said he would not give in to what he called foreign dictates.

Some U.S. officials responded sharply to that.

"President Mubarak's announcement that he will remain in power is deeply unfortunate and troubling," said Republican Sen. John McCain of Arizona. "The voices of the Egyptian people are growing louder and more unified, and they are not demanding partial transfers of power or minor adjustments to the current government. They are calling for President Mubarak to step down."

Joel Rubin, a former State Department official under President George W. Bush, said Mubarak was directly referring to the United States on Thursday when he said he would not be pushed out by foreign powers.

"He's daring them," said Rubin, deputy director at the Washington-based National Security Network. "The White House will have a harder time messaging now because he's called their bluff."

Washington officials followed the unfolding drama in Cairo with hopeful expectation for a smooth transition — mixed with concern over the unpredictability of the developments.

"There is no question that what we are seeing happening in Egypt will have tremendous impact," Panetta told the House Intelligence Committee. "If it's done right, it will help us a great deal in trying to promote stability in that part of the world. If it happens wrong, it could create some serious problems for us and for the rest of the world."

The administration was also watching closely for developments that might affect U.S. aid to Egypt. A coup or other non-constitutional transfer of power could trigger a suspension in all non-humanitarian assistance. The U.S. is providing at least $1.5 billion annually to Egypt in military aid.