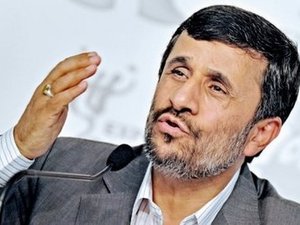 President Mahmoud Ahmadinejad said Friday that the Middle East will soon be free of the United States and Israel, as massive crowds of Iranians chanted pro-Egypt and anti-American slogans while marking the 32nd anniversary of the Islamic revolution.

Ahmadinejad warned Egyptians to be "watchful of the friendly face" of the United States.

"We will soon see a new Middle East materializing without America and the Zionist regime and there will be no room for world arrogance (the West) in it," the hardliner told cheering crowds of men, women and children gathered in Tehran's Azadi (Freedom) Square despite cold and cloudy weather.

In a speech directed in good part at the Arab uprisings, Ahmadinejad said Egyptians need to be careful.

"They (the United States) have adopted a friendly face and saying 'we are friends of people of North Africa and Arab countries', but be watchful and united. You will be victorious," he said.

Iran, which has no diplomatic ties with Egypt, has expressed its support to the uprising there, with supreme leader Ayatollah Ali Khamenei calling for installing an Islamic regime in the Arab nation.

In his trademark fiery style, Ahmadinejad, who has often denied the Holocaust, said the United States is an "accomplice to the oppression of the Zionist regime."

"If you want people to trust you, first of all do not interfere in affairs of the region, including in Tunisia and Egypt. Let them be by themselves," he said.

"Come and take away the Zionist regime which is the source of all crimes... take it away and liberate the region. Free the region and give it to the people and take this regime, which is the child of Satan, out."

Crowds of Iranians chanted pro-Egypt and anti-U.S. slogans as they participated in the regime-organized anniversary celebrations -- a yearly rallying point for the Islamic regime.

Chants of "Egyptians, Tunisians, your uprisings are just and we are with you" and "Hosni Mubarak 'mubarak' (congratulations) on the uprising of your people!" were heard in streets of Tehran.

The 1979 revolution toppled the monarchy of shah Mohammad Reza, a key U.S. ally in the region. Diplomatic relations between Tehran and Washington were broken off soon after and remain so to this day.

The European Union is boycotting events marking the anniversary in protest at the hanging of Zahra Bahrami, an Iranian-Dutch woman executed by Tehran for drug smuggling.

The boycott, agreed by the political and security committee of the European Union on February 4 was "in protest of the execution of Ms. Zahra Bahrami" who was hanged on January 29, a diplomatic source said.

The Netherlands has condemned the hanging of Bahrami, who was initially arrested during mass protests over Ahmadinejad's disputed 2009 re-election, which sparked a deadly crackdown, but executed on drug smuggling charges.

Her execution prompted the Dutch government to freeze all diplomatic contact with what it labeled a "barbarous regime" in Iran.

During last year's anniversary rally, Iran's opposition had attempted to stage anti-government demonstrations which were crushed by security forces and the Basij militiamen.

Since then, the opposition supporters have stayed off Tehran streets but their leaders Mir Hossein Mousavi and Mehdi Karroubi have sought to hold a rally on Monday in support of Arab uprisings in the region.