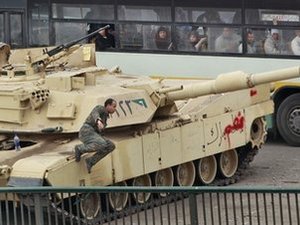 The Egyptian army threw its weight behind President Hosni Mubarak on Friday while trying to reassure anti-regime protesters that it will ensure he follows through with democratic reforms.

The army said it would guarantee free and fair elections and vowed to lift the much-criticized emergency law, without specifying a date.

But it also asked protesters -- who for 18 straight days have been calling for Mubarak to immediately stand down after three decades in power -- to go home and get back to work.

The council said it had agreed to "lift the emergency law as soon as the current circumstances are over" and "to hold free and fair presidential elections based on constitutional amendments."

The army said it was committed to "safeguarding the legitimate demands of the people and will work to implement them ... for a peaceful transition of power and a free democratic society."

The communique stressed it would not arrest those calling for reform, but warned against any "harm to the safety and security of the nation."

The army also urged government workers to go back to work, after a series of wildcat strikes on Wednesday and Thursday.

Meanwhile, three Egyptian officers shed their weapons and uniforms on Friday and joined the of protesters, witnesses said.

"They joined the crowd, smiling, and chanted slogans calling for the fall of the regime," student Omar Gamal told Agence France Presse from Tahrir Square, the focal point of the protests.

An AFP reporter saw one of the soldiers addressing the crowd to loud cheers. Protesters had spent the morning chanting for the army to join them in opposing the regime.