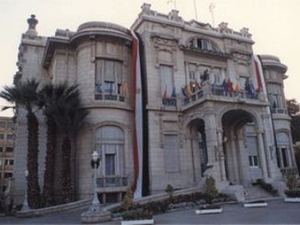 Islamist students halted the filming of an Egyptian television series at Cairo's Ain Shams University protesting against the "indecent “clothing of the actresses, the production company said Thursday.

Misr International films had obtained permission from the university's management to film on site, the head of the company, Gaby Khoury, told Agence France Presse.

But "when the shooting started, the director of the engineering faculty, Sherif Hammad, came to tell us that some students and teachers were against it, because of the clothing worn by the actresses," he said.

The series, adapted from the novel "Dhat" by Egyptian author Sonallah Ibrahim, takes place in the 1970s, "when women wore short clothing."

Hammad "insisted that the filming should stop and that we would be reimbursed ... explaining that he was not able to guarantee the protection of the materials or the artists," Khoury added.

In a statement on Wednesday evening, the production company said "the student members of the Muslim Brotherhood at Ain Shams University had prevented the film crew from the 'Dhat' TV series from shooting the scenes set at the university."

The students had objected to the "indecent" clothing, it said, and "categorically refused" to let the filming continue unless the costumes were changed.

Islamists have become a potent force in Egypt's already conservative society in recent years, and won more than two-thirds of the seats in the recent parliamentary elections.

Earlier this month, the Arab world's most famous actor, Adel Imam, was sentenced to three months in jail for "defaming Islam" in several roles on stage and screen.

Imam said he would appeal the sentence.