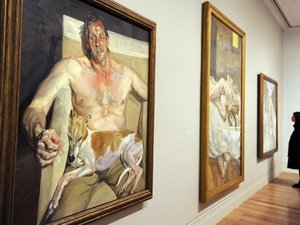 A major exhibition of paintings by British artist Lucian Freud, including the final work he painted before his death in July, go on show to the public in London on Thursday.

Prince William's wife Catherine, who studied history of art at university, visited the exhibition at the National Portrait Gallery on Wednesday before it opened to the public.

The 130 paintings on show include the gloriously fleshy "Benefits Supervisor Sleeping", which fetched $33.6 million at auction in New York in 2008 -- a world record for a living artist.

The woman who posed nude for that canvas, Sue Tilly, was happy to be photographed in front of some of the paintings at a preview of the show on Wednesday, although she kept her thoughts to herself.

Aside the abundant flesh of the reclining Benefits Supervisor -- there are four canvases of her, all completed in the 1990s -- are pictures of skinny men, picked out in great gobs of skin-colored paint.

David Hockney, the man widely regarded as Britain's greatest living artist since Freud's death, is another subject, while Queen Elizabeth II features in another canvas.

Freud also turns his focus on his grey-haired mother, complete with swollen ankles.

His final portrait was of his pet dog and his studio assistant David Dawson, but it is unfinished.

"You can see that the poses took time, the paintings took time and that is reflected in the face and in the body -- that sort of languidness or weariness," she said.

The works span seven decades, during which Freud, who died at the age of 88, rarely talked about his art and met most requests for interviews with a stony silence.

The exhibition has received rave reviews from the British press. The Guardian described it as a "tremendous show" while The Times awarded it five stars and said it was "moving".

At the age of 81, Freud agreed to be interviewed for a book in which he declared that it had taken him nearly half a century to "know that the main point about painting is paint: that it is all about paint."

Freud was born in Berlin in 1922 but the family moved to London in 1934, fleeing the rise of the Nazis.

His Austrian grandfather, Sigmund Freud, the founder of psychoanalysis, joined them in the British capital in 1938.

The exhibition, "Lucian Freud Portraits", runs until May 27.