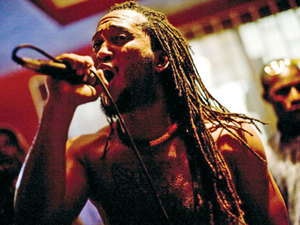 The beat is infectious U.S.-style hip hop but the rhymes come straight from the streets of Monrovia, a city which for years has had very little to sing about.

In a sound-proof recording booth in the centre of Liberia's teeming capital, sweat beads on the forehead of 30-year-old Jonathan Koffa -- aka Takun J -- as he spits out a stream of improvised lyrics into a microphone.

Koffa is one of the founding fathers of "hipco", a homegrown musical mash-up of hip hop and the Liberian "colloquial" English.

In a nation still reeling from years of conflict and with a high rate of illiteracy, it's a style of music that's speaking to the young people of Liberia in words they understand.

"We had just come from war and people just wanted to cancel the stress and just dance and wanted to hear something different -- and we relate to one another easily with hipco" says Koffa, smoothing a narrow goatee that sits low under his chin in the style of US rapper Snoop Dog.

The on-off 14-year civil war in the west African nation left around a quarter of a million people dead -- but also deprived an entire generation of an education and of a chance to engage with Liberia's music scene.

Only now, with the relatively stable government of Africa's first and only elected female president Ellen Johnson-Sirleaf, is the continent's oldest republic beginning to show its creative colors.

And with the help of new radio stations, and the limited but expanding use of mobile phones and the Internet, hipco is leading the charge.

"People understood what I was saying in the song -- every five minutes they (police) beat me and chased me and sent me to jail."

The music bridges the gap between the much-admired symbols of American culture and young Liberians for whom the bling, cars and cash seen in hip hop videos is as foreign as the bright lights of downtown Manhattan.

Liberia was founded in 1847 by freed American and Caribbean slaves and the links remain strong -- not least in the red and white stripes of the national flag.

"People tried to do their music like the Americans but we're not American so we came out with this hipco stuff which is our own way of talking to Liberian people," Koffa says.

"I'm from the streets and I write about the people who have been neglected and rejected, who feel they cannot make it in society and so that's why we write these songs."

Koffa no longer gets locked up for the lyrics he writes and recent songs like "Six Jue" and "Who Make You Cry" talk more about relationships than running from the police.

But while he dreams of fame, wealth remains out of reach.

In a country of mass unemployment and with more than 60 percent living below the poverty line, few can afford to buy music on tape or CD.

"We are just young people trying to build a career in this industry but there is no money in it," says 33-year-old Hazem Harb, co-owner of the HOTT FM radio station, and part-time promoter for Takun J and other hipco artists.

Harb made 10,000 copies of his first hipco compilation CD, giving most of them away.

"We're still trying to figure out how to make money out of this music -- now we're just getting the buzz out there, we're not concerned about money. But I will tell you that if you come here after one maybe two years or even where you come from, you will hear the music from right here in Liberia."

Taking his turn on the microphone, 32 year-old Rabbie Nassrallah -- aka Nasseman -- adds his distinctive reggae style to the mix.

The only way for artists like him to earn any money is to sell the rights to his songs for a few hundred dollars a time -- or to hope to sell a few CDs after a concert.

"Every artist has got to make sacrifices. It's how you get exposed to an audience, then people are willing to pay -- at the end of the day it's exposure you need," says Nassrallah, flicking aside shoulder-length dreadlocks as he and Koffa nod to the beat of one of their collaborative tracks "Where I'm From".

"These people, they don't really understand the hipco kind of music that's in Liberia -- mainly they like traditional music, gospel music," says local music shop owner Avi Dari, pointing to shelves stacked high with cassettes, some of them buckled in the tropical heat.

"But hipco is growing, it's getting bigger."

For Koffa, the question is not how but when his big break will come.

With videos and photos on YouTube and Facebook, he's hoping to catch the eye of producers and promoters abroad.

"I want to be a legend and I don't want anybody to take that claim -- I almost got killed for this. We want to get this sound outside Liberia, we want to get the word out there -- show the world how we talk."