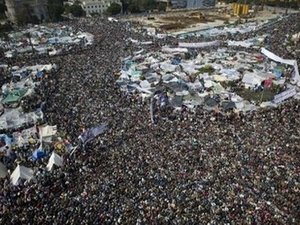 President Hosni Mubarak flew out of Cairo to his Red Sea retreat on Friday as more than a million furious Egyptians marched in cities around the country to demand he step down.

Egypt's army threw the 82-year-old strongman a lifeline, endorsing his plan to stay in office until September even as determined protesters marched on state television headquarters and the presidential palace.

Demonstrators sobbed as they conducted the weekly Muslim prayer in massed ranks in Cairo's Tahrir Square, the city plaza that has become a symbol and focal point of the revolt since it was occupied by protesters in late January.

The preacher choked with emotion as he gave the sermon and the crowd screamed "Leave! Leave!" at each mention of the president.

Mubarak's ruling National Democratic Party (NDP) confirmed he had flown to Sharm al-Sheikh, on Egypt's Red Sea Coast, where he has a holiday home, but this did nothing to quell the anger of the crowds thronging the streets of the capital.

"People here don't care if he's in the palace or not. We want him to quit the presidency," said 40-year-old Mohammad Hamdan, who works for an oil firm, as he joined the protest outside Mubarak's palace in the Cairo suburbs.

"He has to leave the country, our demands are clear, we want the entire NDP to be dissolved and to get out because they have destroyed the country," said Magdi Sabri, a smartly dressed middle-aged man outside state television.

In a statement read out on state television a little earlier, the military said it would guarantee that Mubarak follows through with his promises to reform the constitution to ensure a fair presidential poll in September.

But the protesters had wanted the army to go much further and unseat the 82-year-old autocrat, who has ceded unspecified powers to his vice president but refuses to quit despite weeks of demonstrations against his 30-year rule.

The military's decision enraged supporters of the pro-democracy movement, who were are already livid that Mubarak failed to announce his resignation in an address to the nation on Thursday night.

The army's Supreme Council had raised the hopes of many ahead of Mubarak's televised address, announcing they would act "in support of the legitimate demands of the people" and "take steps to protect the nation."

But Friday's announcement, read aloud on state television, suggested the military has now thrown its weight behind Mubarak and the concessions he has so far offered in a bid to calm the revolt.

It also said it was committed to "safeguarding the legitimate demands of the people and will work to implement them... for a peaceful transition of power and a free democratic society."

Outside the presidential palace, protesters reacted furiously to the military's announcement, which was read to the crowd by a colonel.

One demonstrator grabbed his microphone to berate the military. "You have disappointed us, all our hopes rested in you," he shouted, as the crowd began to chant slogans calling for Mubarak to be put on trial.

"No, no, this is not a coup," the colonel protested, insisting that the army would not take power itself.

In Tahrir Square, the epicenter of the daily protests in Cairo, hundreds of thousands of protesters packed in for the Friday prayer, united in fury.

In a show of solidarity in at least lower levels of the army, three Egyptian officers shed their weapons and uniforms and joined the protesters.

An impassioned preacher addressed the military in his sermon, exhorting them to "act in a way that will be acceptable to God on judgment day," shortly before fainting and being carried away through the crowd.

On Thursday night, hundreds of thousands had crowded into Tahrir Square to hear a speech that was widely expected to be Mubarak's last as president.

Instead, he delegated some of his powers to his ally and Egypt's former intelligence supremo, Omar Suleiman, while vowing he would stay in office until September and one day die in Egypt, ruling out a flight into exile.