For a Royal Film Shoot, Book Versailles -- Where Else? 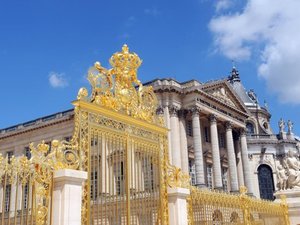 The Chateau de Versailles, the backdrop to "Farewell My Queen" which opened the Berlin film festival Thursday, has long welcomed filmmakers into its grounds, provided they behave themselves.

Sofia Coppola's "Marie-Antoinette" in 2005, with its candy-colored take on courtly life, followed the next year by "Da Vinci Code", have rekindled industry interest in France's rich web of historic settings, chief among them Versailles, which has hosted some 1,000 film, television and documentary shoots since 1940.

"Not a year goes by without one. Japan in particular is a regular at Versailles," said Denis Berthomier, general administrator of the chateau west of Paris and its 900-hectare (2,200-acre) grounds, property of the French state.

Versailles asks only one thing of its guests: "no fire or destruction" in the screenplay.

For the rest, "I trust people -- and I have never been let down so far," Berthomier said.

French director Benoit Jacquot was among the latest to take over Versailles for "Farewell My Queen", which stars Diane Kruger as Marie Antoinette on the eve of a French Revolution told from the point of view of the underclass.

The picture, one of 18 pictures vying for the Golden Bear top prize the 62nd Berlinale, features Kruger in the final frantic hours of Louis XVI's court at Versailles in July 1789 as armed peasants massed at the gates.

For the shoot, Jacquot let loose some 200 extras, in addition to a small army of technicians, on the wooden floors of Versailles' Hall of Mirrors.

"I never thought they would let me do it -- and I was a bit worried," the director said. "It was a lot to ask. We brought in a trailer for the travelling shots -- but on wheels, not on rails."

"At the Chateau they told us the hall had seen worse. The only thing they asked was for us not to use artificial light."

For practical reasons, and to stay on budget, Jacquot shot some of the film's scenes in other chateaux.

"But Versailles was the main character in the film -- and the most expensive too," he said.

For a day inside the chateau, count 15,000 euros ($20,000) before tax, and 10,000 for the gardens -- a price set during the Coppola shoot, which Versailles used as a chance to draw up a formal film policy, explained Olivier Rene Veillon, head of the Paris region film commission.

"Versailles is one of our greatest stars," he said, citing for instance Woody Allen, who spent a day in the chateau gardens shooting two scenes for his recent "Midnight in Paris".

"A decor like this one can just as well be the star of an international production like James Bond."

For Berthomier, renting out the chateau and its grounds makes sense as a publicity exercise -- far more than as a money raiser.

"On a good year, site rentals bring in perhaps 200,000 euros -- which is the equivalent of one day's visitor tickets in high season. So it is not really about money.

"On the other hand, the number of people who see a film can amount to two years of visitors" to Versailles, which hosts 6.5 million people each year. "It is a secondary activity -- but a good display window."

Advertisements -- like one recently shot for a top perfume -- are billed on a different scale altogether, although in the case of ads the chateau is far more choosy about whom it invites in.

For filmmakers, the rule is that shoots must not interfere with the paying public -- with the result that most filming takes place at night and on Mondays when the chateau is closed.

"Sofia Coppola set up her cameras from Sunday night until Tuesday morning, for three good weeks in a row," recalled Veillon.

Another quirk of the Coppola shoot: there "were as many firefighters as extras" since the director insisted on shooting by candlelight. Like Stanley Kubrick for his 1975 movie "Barry Lyndon".

"But we have never had to deplore any damage. People are very respectful," said Berthomier.

The latest crew to play court at the chateau was a German superproduction, worth more than 30 million euros, about Ludwig II of Bavaria, chronicling the eccentric future king's youth in Paris in the mid-19th century.