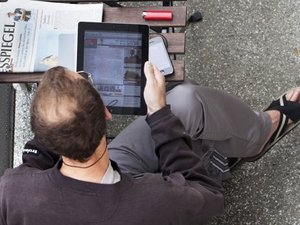 From culture-jamming youths wired into a networked world, to neo-dandies or take-it-slow types, what tomorrow's man will look like -- and what he might want to buy -- is a capital issue for big brands.

Back in 1994 the term "metrosexual", short for "metropolitan heterosexual", was coined to describe an emerging breed of male: urban, single, sophisticated and ready to spend what it takes to look good.

To find out what lies in store for the growing men's lifestyle market, trend consultants Peclers Paris scanned the globe looking at consumer behavior, art, film, high-tech, product design and the all-changing rise of social networks.

"We always challenged the metrosexual model as too narrow," said Emma Fric, director of research and forecasting at the firm whose clients include Microsoft, Sony, Reebok and BMW.

In Paris last week, she offered a series of pen portraits of urban man in his post-industrial, 21st-century habitat, from Europe to the United States, Japan or Latin America.

First is a group aged 15 to 30, a wired generation raised in the Internet age, dubbed "transitioners" by Peclers Paris.

"We are dealing with a generation of men who truly embrace flexibility as a way of life," said Fric.

Many will have "slash" careers, a term derived from the slash signs on the business cards of multi skilled freelancers like a musician/designer/consultant.

Their tastes are just as kaleidoscopic, with a culture-jamming approach to fashion and aesthetics. And having grown up with computer games they expect to have fun as consumers too.

Cutting edge products already cater to this generation, such as trainers with an embedded chip in the sole that can link two people as Facebook "friends" when each stands on a tactile pad.

Like the "metrosexual", these young men are willing to spend money on a suit, a body scrub or the latest tech gadget, but this is also a generation that doesn't take itself too seriously.

Humor is an important part of the mix: a taste for the absurd joke and comic self-deprecation, in the vein of the prank clips that regularly go viral on Facebook or YouTube.

With one in two urbanites now single, many are exploring new forms of no-strings-attached relationships, as seen in the movie "Sex Friends", and they accept a blurring of lines between masculine and feminine.

"But this is not the Calvin Klein androgyny of the 1980s," said Fric. "It is much more subtle. By allowing themselves to be fragile, men are finding a new humanity."

Like young men through the ages they challenge the establishment, but while the 1960s generation was told to "turn on, tune in, drop out," they believe in changing the system from within, using new forms of consumption like group-buying to make brands hear their concerns.

Then there is a second family of man -- generally older, often richer -- who cultivates singular tastes, values silence and quiet luxury.

"These are men who say, 'The networked world is all very well, but what about my private life? What about individuality?'" said Fric.

Many will be anti-conformists, with "a subversive edge, who don't fit the mold," Fric said. An example from popular culture could be the figure of Don Draper, the hero of the U.S. TV series "Mad Men".

Some will thrive on the idea of anonymity, of recreating secrecy in a world where all is on display, a trend reflected by the influence of anonymous street artists like Banksy, or the shadowy online hackers group "Anonymous".

This man maybe someone who "makes his presence felt without making a big noise," said Fric.

"Less is more" -- incidentally the name of a new range of men's cosmetics -- is the driving motto for these men, who seek out hidden, performance-boosting features as opposed to flashy designs.

A booming offer of customized clothes and goods is emerging to cater to them, with new technologies like 3D body imaging making made-to-measure accessible to a much larger demographic.

The pinnacle of this trend could be a wallet with built-in biometric fingerprinting that unlocks to the user's touch, or intelligent-designed running shoes that detect his pulse and speed, and zap the data straight to his smartphone.

Finally, there comes a man bent on reconciling nature with modern society.

"This is a kind of masculinity enhanced by a spiritual dimension -- by a link to the natural world," said Fric.

With this more gentle kind of masculinity, comes a whole art de vivre, fed by the "Slow" movement, or publications like "The Idler", an annual magazine devoted to the lost art.

Other signs of the philosophy include the MovNat trend, just spreading from the United States into Europe, which urges men -- and women -- to get in shape by moving like animals, climbing trees barefoot or hanging upside down.

Luxury brands are tapping into this trend, the epitome being an Hermes man's watch that can be "stopped" to take a few hours out from the rat race.

Ergodesign is a big part of this man's life, so when he settles down at his desk, his chair bends to allow the practice of Chinese martial art tai chi.

He may also be a keen consumer of high-tech goods that aim to achieve zero-loss recycling, or "nutricycling", like a biodegradable sneaker with seeds in its sole, that when planted grows into a tree.