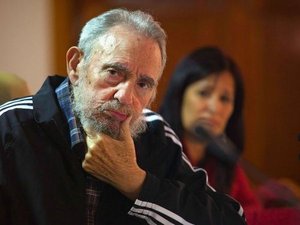 More than 200 foreign writers and intellectuals were to take part in the celebration, which lasts through February 19.

This year's event highlights the culture of the "Greater Caribbean" -- defined as a vast, transnational and multicultural swath extending from New Orleans in the southeastern United States to the state of Bahia in Brazil.

"The International Book Fair is perhaps the most important cultural event that takes place in Cuba," said Eduardo Fernandez, director of Cuba's literary chamber told the official Granma daily newspaper, noting that there is not only a focus this year on the written word, but that it will have a performing arts component as well.

A Bob Marley tribute concert has been planned for this Friday at Havana's Mella Theater, attended by a score of Caribbean musicians, including Barbados's Mighty Gabby; Shermelle 'Skarpion' Williams from St. Vincent and the Grenadines, and Cuba's own Gerardo Alfonso.

Castro's 1,000 page book, "Fidel Castro: Guerrilla of Time," recounts his stories from his childhood and explains how he became a revolutionary.

It also touches upon the story of already familiar story here of how his band of 300 fighters in the Sierra Maestra mountains eventually prevailed over the government of Fulgencio Batista in the revolution that seized Havana on New Year's Day in 1959.

Castro ceded power to his younger brother Raul in 2006 due to illness, and has spent his convalescence writing books and news articles, and occasionally meeting with foreign dignitaries.

He made his last public appearance over the weekend at an event officially launching the just-published work, in what was his first time seen in public in ten months.

More then 400 books are to be featured at the fair, to be held in a large Spanish-style fortress near Havana Bay.

Among the writers and intellectuals confirmed to attend is novelist Adolfo Perez Esquivel, winner of the Nobel Peace Prize.

After the book fair concludes, it will travel around the country, wrapping up on March 4 in the eastern city of Santiago de Cuba.