Belgian Court Refuses to Ban 'Tintin in the Congo' 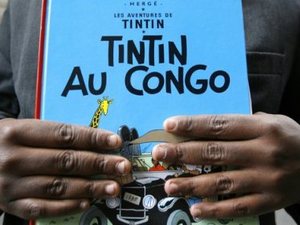 A Belgian court refused Friday to ban the sale of "Tintin in the Congo," rejecting arguments by a Congolese man that the iconic comic book was filled with racist stereotypes about Africans.

The Brussels court ruled that Belgian anti-racism laws only apply when there is a willful intention to discriminate against someone, said an attorney for Bienvenu Mbutu Mondondo, the man who tried to get the strip off bookshelves.

The court argued that given the historical context -- the book was written during the colonial era in 1931 -- the author, Herge, "could not have been motivated by the desire" to discriminate, the lawyer, Ahmed L'Hedim, told AFP.

For the past four years, Mbutu Mondondo had sought to get the book banned or at least force stores to place a warning label on the cover or add a preface explaining that it was written in a different era, as English versions do.

"It is a racist comic book that celebrates colonialism and the supremacy of the white race over the black race," he said last year.

Both of his requests were rejected but Mbutu's lawyers said he would appeal the decision on Monday.

A representative for French publishing house Casterman and Belgian firm Moulinsart, which holds the rights to the Tintin franchise, welcomed the decision with "great satisfaction."

"This decision is very sound. You have to take the work in its context and compare it with the information and clichés of its time," said Alain Berenboom, who had warned that a ban would amount to censorship.

Herge, real name Georges Remi (1907-1983), justified the book by saying it was merely a reflection of the naive views of the time. Some of the scenes were revised for later editions.