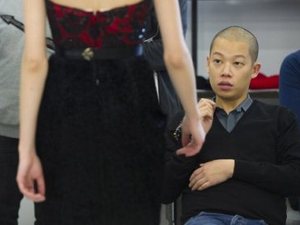 Jason Wu brought the mystery of the Forbidden City to New York fashion week on Friday with a fall-winter collection inspired by his Chinese heritage and 1930s Hollywood glamor.

Born in Taiwan and raised in Canada and the United States, 29-year-old Wu famously designed the gown First Lady Michelle Obama wore to the January 2009 balls that accompanied the inauguration of her husband Barack Obama as president.

But his collection on day two of Mercedes-Benz Fashion Week reflected a growing personal interest in his Chinese roots, with a touch of Marlene Dietrich in "Shanghai Express" thrown in for good measure.

He credited a voyage of discovery back to Asia with his father 18 months ago for stirring his imagination.

"I was born Chinese, but I had not been back in my country for so long," he told AFP backstage.

"My dad took me to see an exhibit on the Chinese Qing Dynasty warriors and I was so taken by the subject that I thought it was important for me to go back to my roots," he added.

The result: a collection that wraps up "my answer to what is Chinese."

Unmistakable in Wu's looks as they emerged from huge Oriental palace doors was the slim sleek silhouette of the cheung sam, with stiff half-collars and teardrop necklines, in scarlet, blood red or charcoal black hues.

"These are different interpretations of China," he said, "all very strong, all very fierce -- we knitted them together like a cinematic experience."

In other shows Friday, Michael and Nicole Colovos for Helmut Lang built upon the label's return to the runway last season with a very urban parade of peaked shoulders and pinched waists -- but it was the boots that had people talking.

Grey, black or floral wedge boots, often boldly thigh-high, stood among in nearly all of the 40 razor-sharp looks the designer couple set out via a mirrored ramp in a converted warehouse in the SoHo section of Manhattan.

Earlier, New Zealand's Rebecca Taylor, a favorite of "Sex and the City" star Sarah Jessica Parker, made good use of shearling, quilted Bordeaux leather and "beautiful digitalized prints" -- her words -- for her 40-look collection.

"We were looking at a lot of layers, a lot of textures," Taylor told reporters backstage. Her herringbone coats and stovepipe jeans in particular recalled the heyday of 1980s New Wave vintage style.

For evening wear, highlights included python-print halter dresses that Taylor matched with shoes and accessories of her own design, in a well-received show set to the beat of the Skatt Brothers' 1979 dance-floor tune "Walk the Night."

Fans packed the late-morning Concept Korea presentation, although it was hard for a caring soul not to feel for the models who bravely endured a full hour in static poses on terraced platforms in precariously high heels.

Moving on from their floral designs of last season, Steve J and Yoni P came up with a whimsical starburst design that fell into place as easily in sheer lace as it did in knitwear.

"It makes our collection more fun and more young, said Yoni Pai, whose creative partnership with Steve Jong -- forged during their fashion school days in London a decade ago -- has only grown since they married two years ago.