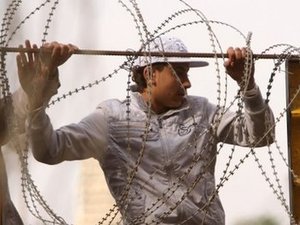 Egypt's military relaxed a nighttime curfew Saturday and banned current and ex-government officials from traveling abroad without permission in its first moves since taking power after President Hosni Mubarak's ouster.

The moves came as Egyptian protesters were jubilant over their success in ousting the longtime authoritarian leader, but many vowed to stay camped in Cairo's central Tahrir, or Liberation, square until they hear "clear assurances" that the military will meet their demands for democracy.

Mubarak surrendered power to the military Friday after an 18-day uprising by millions of protesters demanding his ouster and the introduction of sweeping democratic reforms. Mubarak's regime has faced long-standing allegations of corruption.

The Supreme Council of the Armed Forces pledged to shepherd reforms for greater democracy and said it would issue a statement Saturday detailing its next steps.

A Cairo airport official said there is a list of former regime members and current officials with state institutions who are not allowed to leave the country without permission from the state prosecutor or the Supreme Council of the Armed Forces.

The official, who spoke on condition of anonymity because he wasn't authorized to release the information, declined to identify those on the list. But he said Information Minister Anas el-Fiqqi sent his luggage but did not appear for a planned flight to London Saturday, apparently after hearing of the ban.

"These instructions are meant to prevent any people who were in charge in the previous era from fleeing," the airport official said.

Egypt's state television also reported the military had ordered that a nighttime curfew be relaxed to start at midnight and end at 6 a.m. — instead of 8 p.m. to 6 a.m.

It was the latest sign that life was returning to normal.

Banks reopened last week and the stock market was scheduled to reopen on Wednesday, nearly three weeks after it was closed.

Most stores in Cairo have reopened, and the usually congested traffic in the city of 18 million is returning to its normal level.