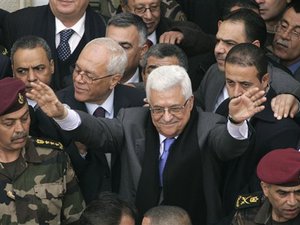 A top aide to President Mahmoud Abbas said the Palestinian Authority will hold presidential and legislative elections by September.

The move appeared to be a response to the popular protests that drove Egyptian President Hosni Mubarak to step down late Friday.

Elections were supposed to have been held last year, but the vote was put off because of the split between Abbas' government in the West Bank and the rival Hamas regime in the Gaza Strip.

Hamas, which rose to power in Palestinian elections in 2006, rejected the Palestinian Authority elections' decision. Both sides have been cool to holding a new vote.

Abbas aide Yasser Abed Rabbo announced the plans for elections at a press conference Saturday. He did not give a date.

Erakat told AFP he was stepping down because of his responsibility for the disclosure of confidential documents on Al-Jazeera, shortly after his resignation was announced by senior PLO Yasser Abed Rabbo.

The chief negotiator said he was assuming "responsibility for the theft of documents from his office" that he said had been "deliberately" tampered with.

Last month, Erakat accused Al-Jazeera of taking part in a campaign to overthrow the Palestinian Authority (PA) after the Doha-based television began to release more than 1,600 confidential files known as "The Palestine Papers."

The documents, shared by Al-Jazeera and Britain's Guardian daily, expose concessions to Israel in 10 years of secret peace talks, embarrassing and angering the Palestinian leadership.

Erakat at the time accused Al-Jazeera of trying provoke his people into "a revolution against their leaders in order to bring down the Palestinian political system."

He pointed to a possible US-Israeli effort to topple the PA because of its refusal to take part in US-brokered direct peace talks unless the Jewish state halts West Bank settlement construction.

The files allege that Palestinian negotiators offered unprecedented concessions during peace negotiations, including on the ultra-sensitive subjects of Jerusalem and refugees, with nothing in return from Israel.

They also show PA members closely cooperating with Israel in the fight against the Palestine Islamist movement Hamas, Fatah's bitter rival which rules the Gaza Strip.(AP-AFP)