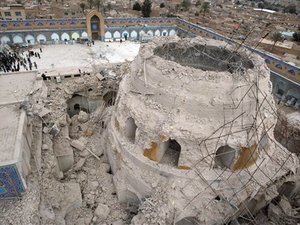 A suicide bomber blew himself up inside a bus filled with Shiite pilgrims returning from mourning rituals in the Iraqi city of Samarra on Saturday, killing at least 30 people, hospital sources said.

"The suicide bomber quickly ran into the bus when it stopped at a checkpoint several kilometers (miles) outside Samarra, and detonated his vest inside the vehicle," a police official said.

"All of the victims inside the bus were Iraqi pilgrims, and casualties included people outside the bus as well," said an ambulance driver who ferried the victims to hospital.

It was the deadliest single attack in Iraq since a January 27 car bomb ripped through a funeral ceremony in a Shiite district of Baghdad, killing 48 people.

Samarra, 110 kilometers (70 miles) north of Baghdad, houses the gold-domed shrine of revered ninth century imam Hassan al-Askari which draws pilgrims from Iraq and round the world.

Saturday marked the annual commemoration of his death.

A car bomb ripped through a procession of pilgrims heading for the shrine on Thursday on the outskirts of the town of Dujail farther south, killing at least nine pilgrims and wounding 39, a provincial spokesman said.

Tens of thousands of people died in violence sparked by the destruction of the Askari shrine's gold dome five years ago by suspected Sunni extremists loyal to Al-Qaeda.

Although violence has fallen in Iraq since its peak in 2006 and 2007, attacks remain common.

January was the deadliest month since last September, according to official figures. A two-week surge in violence last month shattered a relative calm in the country.

Data compiled by the ministries of health, defense and interior showed that a total of 259 people -- 159 civilians, 55 policemen and 45 soldiers -- were killed in violence last month.

That figure was the highest since September 2010, when 273 people died.

Prime Minister Nouri al-Maliki has blamed attacks against Shiites on "takfiris," an Islamic term for apostates but used by the premier to mean anti-Shiite Al-Qaeda militants.

Shiite pilgrims have been frequently targeted by militant Sunni groups since the 2003 US-led invasion that toppled Saddam Hussein.(AFP)