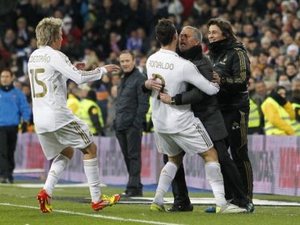 Cristiano Ronaldo hit his sixth hat-trick of the season as Real Madrid took a huge step towards winning La Liga, coming from behind to beat Levante 4-2 and open a 10-point lead over Barcelona.

After Gustavo Cabral gave Levante a surprise early lead, Ronaldo got his first from the penalty spot following a handball by Vicente Iborra, who was also dismissed for his second yellow card.

Ronaldo headed home a Gonzalo Higuain cross after 49 minutes and then completed his hat-trick with a wonderful 30-yard strike which flew into the roof of the net.

An Arouna Kone header briefly gave a glimmer of hope for Levante but Karim Benzema slotted in a fourth for Real after 65 minutes.

While Barcelona, beaten 3-2 by Osasuna on Saturday, have stuttered on their travels, Real have been in ominous form winning 19 of 22 games and scoring 75 goals which has put them on course for their first league title since 2008.

Levante are the only team along with Barcelona to have beaten Real this season and when Cabral headed home a free-kick, which flicked off Sergio Ramos, after just four minutes, Real must have feared another setback.

But Ronaldo's penalty, a minute before the break, helped settled their nerves.

"There are still a lot of points and a lot of matches ahead with all of them difficult because there is a lot at stake," said Real coach Jose Mourinho.

"We need 39 points more to be champions -- 13 victories but these 10 points now give us a margin for error."

Mourinho also took the opportunity to praise Ronaldo who now has 27 league goals this season and whose hat-trick represented a landmark moment for the Bernabeu.

"It was a goal to celebrate, it was fantastic as everyone could see and the 4,000th goal here."

Mourinho also could not resist a criticism of Barcelona.

"In some stadiums when you pass and pass the ball they consider it wonderful but here they whistle and for that reason the players want to continue attacking and taking risks," he said.

"We won't win the league through goal average though but by points and so it doesn't matter if you win 8-0 or less."

Despite their 10-point deficit, Barcelona captain Carles Puyol says the champions will not throw in the towel.

"The league is not lost but it is going to be complicated. This team always fights to the end and what we have to do is try and win every week. We have to concentrate on ourselves and see where we get," he said.

Barcelona coach Pep Guardiola admitted his side's sinking hopes of hanging onto their La Liga crown were at the mercy of bitter rivals Real Madrid following the shock defeat at Osasuna.

"Win the title? Well, we will try to defend our Champions League crown and then attempt to negotiate each match in La Liga," said Guardiola on a freezing night in Pamplona.

"The league will be more difficult for us now.

"In the second half tonight we did well on this pitch but we should have done better in the first half. It was hard for us to get into this game but we have to congratulate Osasuna."

The reigning La Liga and Champions League winners have struggled on their travels this season with just four wins and succumbed to their second defeat on Saturday.

Guardiola continued to put his faith in youth against Osasuna and left Xavi Hernandez, Andres Iniesta and Cesc Fabregas on the bench with possibly their midweek Champions League match with Bayer Leverkusen in mind.

Sergio Busquets was also absent through injury, and the Catalan side lacked their normal fluidity on a bumpy pitch.