Henry Looks to Give Arsenal Parting Gift vs Milan 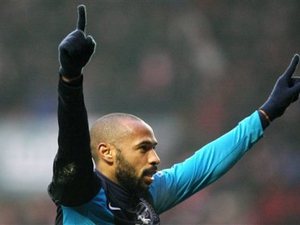 Primed for a brief flirtation with the Champions League, Thierry Henry could give Arsenal the ideal parting gift by helping the English club to victory over AC Milan in the standout last-16 match in Europe's elite competition this week.

Wednesday's first leg at the San Siro will be Henry's last match in a relatively successful loan spell at Arsenal before he returns to the New York Red Bulls ahead of the new Major League Soccer season.

If the veteran French striker is looking for a perfect way to go, scoring at a ground where he claimed a hat-trick for Arsenal against Inter Milan nine years ago wouldn't be too far off the mark.

"He finished the story of the legend in the championship," Arsenal manager Arsene Wenger said, after seeing Henry snatch a stoppage-time winner against Sunderland in the Premier League on Saturday.

"I hope he will add some in the Champions League on Wednesday."

Milan has been eliminated at this stage of the Champions League by English clubs in three of the past four seasons, with Arsenal beating the Italian champions 2-0 at the San Siro in 2008 in its smooth passage into the last eight.

After a hiatus of two months since the end of the group stage, defending champion Barcelona will welcome the return of the Champions League as it prepares for a trip to Bayer Leverkusen.

Barca is struggling to live with a fierce pace set by archrival Real Madrid in the Spanish league, with Jose Mourinho's side 10 points clear at the top and already looking safe bets to reclaim the title.

However with the likes of Argentina maestro Lionel Messi and Spain playmaker Xavi Hernandez in its team, Barcelona still appears the side to beat in Europe as it goes in search of a fourth Champions League title in seven years.

"The Champions League is a prestigious competition, the most prestigious. We'll do everything to win it," Barcelona defender Gerard Pique said.

Milan heads into the Arsenal match in high spirits, having regained its position atop Serie A with a 2-1 victory at Udinese on Saturday and with its lengthy list of absent players finally starting to relent.

Christian Abbiati, Alessandro Nesta, Kevin-Prince Boateng, Alexandre Pato, and Mathieu Flamini have all returned to training and are likely to be available, while Sweden striker Zlatan Ibrahimovic is back from a domestic ban.

"We really want it," Milan goalkeeper Marco Amelia said. "In the last few years, we have always gone out against an English team. We want to do well, the Champions league gives you really great feelings."

Unlike Milan, Arsenal isn't competing for its domestic title but has the Premier League's top scorer in Netherlands striker Robin van Persie.

The London club, which should start with Henry on the bench despite his heroics at Sunderland, will be without Per Mertesacker after the Germany defender damaged ankle ligaments at the weekend.

Wenger is keen to grab an away goal ahead of the return leg at Emirates Stadium in three weeks.

"The European system is organized to reward audacious action away from home," he said. "When you go away in the Champions League, you have to score.

"The best way to score is play in an offensive way and we will try to do that."

Barcelona coach Pep Guardiola's main injury doubt is midfielder Sergio Busquets, who has missed two games but will travel with the team.

Guardiola will also look for more from Messi, who is the joint top goal-scorer in this season's Champions League with six goals but has looked below par in 2012 with goals harder to come by than usual.

Leverkusen approaches the match in poor form, having one just one of its last six games in the Bundesliga to slip to sixth place.

APOEL is the first Cypriot team to reach this stage of the competition but is no longer the unknown quantity it was at the start of group play.

It comes up against a Lyon team which has qualified for the last 16 for the ninth season running.

"It's wrong to compare APOEL with big European teams," APOEL coach Ivan Jovanovic said. "We consider our course in Europe as something normal. A lot of things have to fall into place to achieve something like this."