All That Glitters: London Metal Thieves Target Works of Art 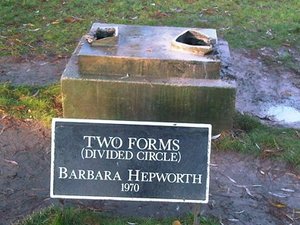 Gangs of metal thieves are targeting London's sculptures, statues and even war memorials, stripping them from their plinths and melting them down for their scrap value as commodity prices soar.

Thieves have been plundering pipes and cables for months, but police are increasingly concerned that they are turning their attention to valuable works of art.

"It's an absurd equation: having a really valuable, beautiful piece of work melted down and sold for so little for what the bronze is worth," said Angela Conner, herself a sculptress and Hepworth's former assistant.

The price of metals has rocketed in recent years. Copper topped $10,000 per ton in February last year, a record high, while between 2009 and 2011, the price of iron ore doubled.

"The theft of public art and metal is becoming a sickening epidemic," Peter John, the leader of the Southwark council said after the "devastating" theft of the Hepworth sculpture.

"Metal theft is becoming an increasing issue for us in London and, actually, in the UK," said police Chief Superintendent David Chinchen, who is leading a special task force to prevent the crime, codenamed Operation Ferrous.

"It ranges from theft of metals from houses, war memorials, graveyards, transport infrastructure, communication cables, so a whole raft of crimes are occurring as a result of the increasing price of metals."

Government ministers have said they are prepared to look at the laws on scrap metal dealing, hinting at outlawing cash transactions and increasing the penalties for metal theft.

The scrap metal industry in Britain is worth £5 billion a year -- with £1.5 billion of that trade done in cash, while metal theft is believed to cost the British economy around £700 million a year.

The fight back comes as the trouble caused by the thefts rises, with trains delayed, communication networks cut, monuments dismantled and churches damaged

Last October, Scotland Yard police headquarters set up a specialist unit, the Waste and Metal Theft Taskforce, based in Bexley, southeast London, a borough with a high number of scrap metal yards.

Police, transport and telecommunications experts are now working together to tackle the problem.

Across the capital, police have stepped up vehicle checks and visits to scrapyards. Sixty thieves or handlers of stolen goods have been arrested since the unit was set up.

The business is lucrative but dangerous. According to Scotland Yard, on average, two people are killed every month trying to steal the high-voltage electricity cables running alongside railway lines.

"It is a dangerous activity and it's having an impact," Chinchen said.

"We have generators stolen from hospitals, so we've had hospital operations affected by it."

Network Rail, which owns and operates Britain's rail infrastructure, has recorded 16,000 hours of delays caused by metal theft over the past three years.

British Transport Police has put the metal theft second on its priority list after terrorism.

The police have to act fast to stop metal thieves before their plunder is melted down.

As for commemorative plaques or works of art, their loss is irreplaceable.

Fortunately, there are ways to deter the metal thieves.

"It's not the sort of thing you can pop on the back of a wagon, so I'm lucky in that sense."