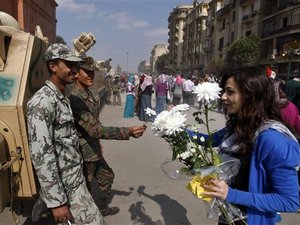 Egypt's new military leadership vowed Saturday to pave the way for democracy and abide by its peace treaty with Israel, as Egyptians basked in their victory a day after Hosni Mubarak's overthrow.

The Supreme Council of the Armed Forces said the current government would remain in place for a peaceful transition to "an elected civil authority to build a free democratic state," although it set no timetable.

The streets and squares of downtown Cairo remained in the hands of the mostly young demonstrators whose determined 18-day revolt overturned 30 years of autocratic rule and triggered an outpouring of national solidarity.

But political power now rests with the military commanders who stepped into the vacuum left by Mubarak's departure, and many people are anxiously waiting to see if they will make good on their promise to respect the popular will.

In Tahrir Square, the epicentre of the revolt, many of the anti-regime protesters who have occupied the city's vast central plaza since January 28 launched a massive cleanup effort with hundreds of volunteers.

"It's party time! We are born again," declared 40-year-old agricultural engineer Osama Saadallah. "We were behind other countries, now we are worth something in the eyes of others, of the Arab world."

Many chose to celebrate the first day of a new era for their country by clearing the detritus of Friday night's mega-party in Tahrir, taking pride in showing the civic spirit in their nation reborn.

In a sign that normal life was returning, state television announced that a curfew in effect since January 28 would be shortened by four hours and the stock exchange was expected to reopen on Wednesday.

But insecurity lingered, as 600 prisoners escaped from a Cairo jail on Saturday after riots broke out and gunmen fired at guards from outside the facility, security officials said.

At least one prisoner was killed and 20 wounded on both sides, they said.

The country was still elated, however, with the Cairo press, including state-run titles that had initially dismissed the uprising or charged it was being fomented by foreigners, hailing the "revolution of the youth."

Saudi Arabia, a close ally of Hosni Mubarak, broke its silence on Saturday and welcomed the "peaceful transition of power" in Egypt.

In the Suez canal city of Ismailiya, hundreds of members of the widely hated police force marched in solidarity with the uprising, insisting they had been ordered against their will to shoot at protesters.

If Egypt's revolution is to serve as an example to the region, as Tunisia's revolt inspired Egypt, much will depend on the stance of the junta now in control of the Arab world's most populous nation.

Headed by a longtime Mubarak loyalist, 75-year-old Field Marshal Mohammed Hussein Tantawi, the Supreme Council of the Armed Forces clarified its plans with "Communique Number 4," read by a spokesman on state TV.

It said Egypt would "remain committed to all its regional and international treaties," implicitly confirming its landmark 1979 peace treaty with Israel would remain intact, soothing fears in the Jewish state and Washington.

Israel, which had expressed concern the unrest could lead to an Islamist takeover, welcomed the statement.

The army was widely praised for allowing the massive demonstrations to unfold peacefully, but the protesters have demanded civilian government and said they will return to the streets in the absence of a swift transition.

In Tahrir Square, the celebrating former protesters continued to enjoy good relations with the troops policing them. Ed Mustafa, 39, a hotel industry trainer, predicted Egyptians would remain patient with their new rulers.

"I'll be happy to give them a year. We need some assistance to return to democracy, but I don't want the army to take over," he said.

"We thank them, they look after us, but we want a civilian government that knows about education and health care. I don't think they can do that."

Egypt's chief prosecutor on Saturday slapped a travel ban on former premier Ahmed Nazif, whom Mubarak sacked along with the rest of his cabinet in a bid to placate demonstrators in the early days of the revolt which erupted last month.

The prosecutor also froze the assets of Habib al-Adly, who as interior minister oversaw a secret police force widely accused of torture and extortion and used to crack down on political dissent.(AFP)