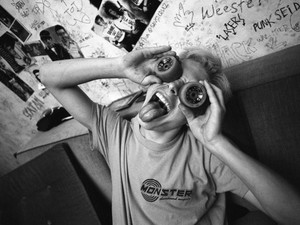 In the suffocating atmosphere that was East Germany, a whole range of misfits managed to find air to breathe and now, two decades after the Berlin Wall's fall, new films are putting communism's "freaks" in focus.

Screening at the Berlin film festival, "This Ain't California" and "Among Men - Gay in East Germany" look at underground skater culture and homosexuality and the drive for individual freedom against rampant repression.

"Rollbrettfahrer" or skateboarders tested their limits beyond the reach of the despised Stasi secret police, pursuing a typical U.S. West Coast pastime on the cracked pavements of the Stalinist state.

No one knows when the first boards arrived in the so-called German Democratic Republic.

Some were slapped together by hand, copying images caught covertly on Western television, while the lucky ones got relatives to bring them original skateboards from the West.

"But depending on the way you look at it, you can find something quite powerful."

The documentary, which combines rare archival footage with animation and an appealing soundtrack, follows friends who share the same passion from their childhood in the early 1980s.

Super 8 film shot by the skaters themselves adds an indelible touch of street credibility as the boys mug for the cameras -- stars in their own movie.

Berlin's iconic Alexanderplatz, a concrete desert rimmed by pre-fab high-rises, becomes a skaters' paradise as they perform leaps and arabesques with their boards in the windswept pedestrian zones.

Intercut are the rigid rhythms of military parades, showing young men not much older than the skaters marching in lockstep.

"We had already seen a lot of things on life in the GDR, the Stasi, a lot of grey, a lot of violence," Persiel added. "Skating was a world away from all that."

The camera captures the group's teenage rebellions, with alcohol-fuelled parties, girls, music -- surprising in how universal they seem despite the political backdrop.

"The guys just wanted to have fun," said Ronald Vietz, one of the former skaters and now 34 and a producer of the film. He said it took two years to find the protagonists.

In an alternately funny and deeply depressing bit of old news footage, an official television presenter blasts the skaters as proponents of the "aggressiveness of the American leisure industry" in which "individualism" and "immorality" reign.

Production soon began on the first East German skateboard, the "Germina Speeder", a simple affair of handsomely varnished wood. But it failed to hold its own against racier models.

When the Wall finally fell, the conditions that held the troupe of skater "freaks" together vanished with it.

"Everyone was wrapped up with his own fate and wondered how to live in the West," Vietz lamented. Almost all stopped skating when they came of age.

"Among Men - Gay in East Germany" by Markus Stein and Ringo Roesener, which is appearing in the festival's Panorama sidebar section, looks at the surprising ways homosexuality played out behind the Wall.

East Germany's ruling class saw being gay as a holdover from the bourgeois decadence they believed reigned in the country under the Weimar Republic between the wars.

The film features six men who described a disconnect between their public and private lives that was even more pronounced than the average East German's and how each designs a strategy for integrity and survival in his own way.

Stein, who grew up in West Germany, said he was stunned to learn that in the postwar years, many gays in the East lived more freely than their cousins in the West, which legalized male homosexual activity in 1969, one year after the East.

"Instead of a group of poor oppressed guys we found people who dealt with their lives as a minority in a whole range of ways," he said in promotional materials for the film.