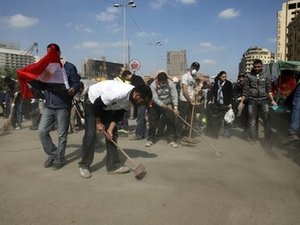 Traffic again flowed through much of Cairo's emblematic Tahrir Square on Sunday as most protesters headed home following the nationwide revolt that brought down President Hosni Mubarak.

Military police directed cars through what had been the epicenter of the uprising, past tanks that were pulled to the side of most roads and giant pictures of "martyrs" killed during clashes with pro-Mubarak thugs.

Hundreds of thousands of people who had occupied the emblematic square had returned home after a massive volunteer clean-up effort that saw hundreds of people from all walks of life sweeping the streets and collecting rubbish.

"All my dreams have come true," said Nour Khersha, a 24-year-old student who slept in the square Saturday night.

"Mubarak left. We will complete our cleaning, polish the stones, and then we will leave the square as clean as it was," he said.

Massive rallies turned to a jubilant city-wide party on Friday after Mubarak handed power to the military, which has vowed to carry out a transition to a democratically elected civilian government.

A few hundred protesters refused to leave until promises for reform are implemented and briefly scuffled with troops who tried to remove them before the soldiers backed off.

"The Egyptian army asked people to leave so that traffic can start again," said Ahmed Afifi, a 21-year-old information specialist.

"But we don't want to go. We will stay until the army answers our demands," which include freeing political prisoners and lifting a 20-year-old emergency law that allows people to be detained indefinitely without being charged.

"The army wants to kill the revolution. They want the people to go away," said Abu Tasnim, a 28-year-old French professor who had been camped out in Tahrir for the past 10 days and declined to give his full name.

The new military leadership said Saturday the current government would remain in place for a peaceful transition to "an elected civil authority to build a free democratic state," although it set no timetable.

Mubarak's 30-year-reign over the Arab world's most populous country came to an end after 18 days of nationwide protests organized by a loose conglomeration of young tech-savvy activists demanding democratic change.