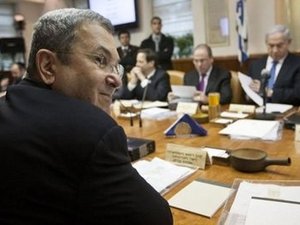 Israel's cabinet on Sunday approved the appointment of Major General Benny Gantz as next chief of staff of the armed forces, ending months of infighting for the post among top generals.

A cabinet statement said Gantz had been unanimously approved for the position, which falls vacant on Monday when the term of incumbent military chief Lieutenant General Gabi Ashkenazi ends.

"General Benny Gantz is an excellent officer and an experienced commander," said Prime Minister Benjamin Netanyahu after the cabinet unanimously approved him for the job.

Gantz, 51, a former deputy chief of staff, was only named to the position after the man designated for the job was disqualified on February 1 over allegations that he had illegally grabbed land around a luxury villa he built.

The discarded candidate, Major General Heavy Galant, who was nominated for the post last year, told local media he was the victim of a conspiracy by his rivals.

The bitter infighting was dubbed the "battle of the generals" during which an allegedly forged document aimed at discrediting Galant was circulated.

Netanyahu said he hoped Gantz would help heal the rifts in the military, especially at a time of uncertainty in the Middle East.

"This appointment will held stabilize the Israel Defense Forces. This is always important, but even more so at this time of deep tremors that have hit our region," Netanyahu said.

Israel has expressed deep concern at the ousting of Egyptian President Hosni Mubarak on Friday after 18 days of nationwide protests organized by a loose conglomeration of young tech-savvy activists demanding democratic change.

Massive rallies turned to a jubilant city-wide party after Mubarak handed power to the military, which has vowed to carry out a transition to a democratically elected civilian government.

The military said Saturday that Cairo would respect its 1979 peace treaty with the Jewish state in a statement immediately welcomed by Netanyahu.

"The longstanding peace treaty between Israel and Egypt has greatly contributed to both countries and is the cornerstone for peace and stability in the entire Middle East," Netanyahu said in a statement Saturday.

Nevertheless Israel still fears that a future, democratically elected government, particularly one including Islamic parties, may not feel the same way.

Born on June 9, 1959 in the southern village of Kfar Achim, Gantz joined the army as a conscript in 1977, completing the tough selection course for the paratroops.

In 1979, he graduated officers' school, and went on to serve as a paratroop company commander and platoon commander.

In 1989, he became head of Shaldag, the air force's special commando unit, and in 1994 he returned to the army to command a brigade and later a division in the Israeli-occupied West Bank.

He has also served as the head of the army liaison unit dealing with U.N. forces in Lebanon and the Lebanese army, as commander of the northern Israel region, covering the Lebanon and Syria borders, and as head of ground forces.

In 2007, he became military attaché to the United States, returning to Israel and in September 2009 becoming Ashkenazi's deputy.

Gantz has a BA in history from Tel Aviv University, a masters degree in Political Science from Haifa University and a masters in national resource management from the National Defense University in the United States.

He is married and a father of four.