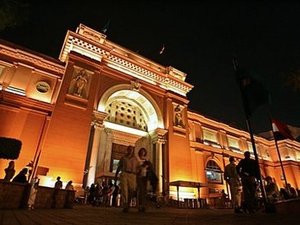 Several major pieces have been stolen from the Egyptian museum, including a statue of King Tutankhamun, Egypt's minister of state for antiquities Zahi Hawass said on Sunday.

Looters broke into the museum in Cairo's Tahrir Square on January 28 when massive protests against then-president Hosni Mubarak drove his despised police from the streets in a series of running battles.

Also missing are a limestone statue of Akhenaten holding an offering table, a statue of Queen Nefertiti making offerings, a sandstone head of a princess from Amarna -- a vast archaeological site in the southern province of Minya.

A stone statuette of a scribe from Amarna, and eleven wooden shabti statuettes of Yuya, a powerful Egyptian courtier from the 18th Dynasty which ruled Egypt 3,000 years ago, were also missing Hawass said.

A heart scarab -- an amulet placed on the chest of the mummy to ensure the heart was not removed -- belonging to Yuya was also missing, he added.

Founded in 1858 by French Egyptologist Auguste Mariette, the museum contains more than 100,000 Egyptian artifacts, including the world renowned -- and reputedly cursed -- treasures from King Tutankhamun's tomb.

The best known artifact is the teenage monarch's gold funerary mask, which stares out from a case on the first floor of the museum.

Hawass said an investigation has been launched to find those behind the theft. "The police and army plan to follow up with the criminals already in custody," he added.

The museum was protected by army tanks and for a while by a cordon of citizen volunteers during nearly three weeks of anti-government rallies that ousted president Hosni Mubarak and left at least 300 dead.