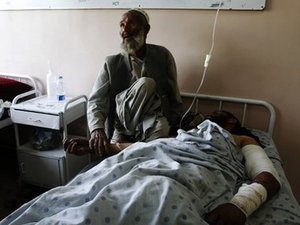 NATO blamed the Taliban on Thursday over an attack on an Afghan wedding that killed more than 40 people in an area U.S.-led troops are massing to dislodge insurgents from their fiefdom.

The cause of the carnage has been unclear, but the government said initial reports indicated that a suicide bomber strapped with explosives had walked into the party reportedly attended by members of an anti-Taliban militia.

The Taliban, which is leading a nearly nine-year insurgency against the Western-backed government and the estimated 142,000 foreign troops in Afghanistan, denied any responsibility for the deaths.

More than 70 people were wounded when the explosion ripped through the celebrations in Arghandab district, 20 kilometers (12 miles) north of Kandahar city, a senior official said.

Most of the victims were male as the explosion occurred in an area of the wedding festivities reserved for men, local officials said.

The groom's brother, Mohammad Zanif, told AFP: "My brother was wounded. We don't know what happened. There was an enormous explosion and as a result everyone there was either killed or injured."

Television channels appealed for people to donate blood to help the wounded.

The interior ministry in Kabul said "initial information" indicated that a suicide bomber blew himself up at the party in Nagan village but said investigators had been dispatched to the scene.

"Forty of our countrymen, including children, were killed and more than 70 others were injured," it added.

NATO forces in Afghanistan blamed the Taliban over what it called an "indiscriminate attack" on the wedding party.

"This ruthless violence brought to the Afghan people at what should have been a time for celebration demonstrates the Taliban's sickening and indiscriminate tactics," said Lieutenant General Nick Parker.

Kandahar is the focus of a massive build-up by U.S.-led military forces trying to drive the Taliban from their spiritual homeland and end their nearly nine-year insurgency.

U.S. President Barack Obama has ordered an extra 30,000 troops to Afghanistan as part of his strategy to end the war, pushing the total nationwide NATO deployment to 150,000 by August.

Wednesday's explosion came during a particularly bloody week for foreign forces with 23 international soldiers killed, including four U.S. servicemen who died when a NATO helicopter was shot down in neighboring Helmand province.

"We will succeed in Afghanistan. We will prevent that country from ever becoming a safe haven again, but it will be a slow, messy and often deadly business," he told a dinner of the Asia Society in Washington.

The New York Times reported that the groom and some other guests at the wedding were members of an anti-Taliban militia set up with the support of U.S. Special Forces.

"There are some programs where special forces units are out in a village stability program where they might find a large village and then help train the locals to defend themselves," Hodges said.

"We don't have enough police and army and coalition forces to cover every single village," he added.

The Taliban have rejected the outcome of a "peace jirga" hosted by President Hamid Karzai last week with a view to coaxing militant fighters to lay down their weapons.

The jirga was marred by a rocket attack for which the Taliban claimed responsibility, prompting two of Karzai's top security officials to resign.(AFP)