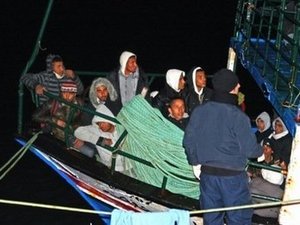 Thousands of Tunisians have been sailing across the Mediterranean in the wake of the North African country's revolution a month ago.

Police estimated more than 2,000 illegal immigrants still remained on the island on Sunday despite an airlift put in place by the authorities to move them to the mainland.

A calm sea and good weather has favored conditions for the would-be migrants.

Most were packed into small fishing boats intercepted by coast guards and taken to Lampedusa.

Hundreds have had to sleep in the open at the port because of a lack of facilities on the island, which also suffers shortages of fresh water.

The government said the decision would enable civil protection officers "to take immediate action needed to control this phenomenon and assist citizens who have fled from North Africa."

In particular, the move will enable the central government to release funds for local authorities in areas which have been inundated by the wave of refugees, most of whom have fled to Lampedusa.