Biblical Park to Go Ahead in Jerusalem Arab Neighbourhood 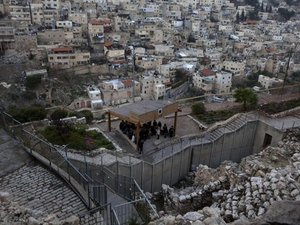 An Israeli planning commission has approved the controversial construction of a Jewish biblical park in an Arab neighborhood of east Jerusalem, the interior ministry said on Monday.

A statement said that the planning and construction commission ofJerusalem gave the go ahead for the establishment of a 5,000 square meter tourist complex in Silwan, a move that will likely further raise tensions in the flashpoint neighborhood.

It will be part of a project called King's Garden, which will also comprise exhibit halls of archaeological remains, conference rooms, a cafeteria and a souvenir shop.

The site, which once served as a car park, is located just below Jerusalem's walled Old City.

The Palestinians see east Jerusalem as the capital of their promised state and oppose any attempts to extend Israel's control over the part of the city that was captured in the 1967 Six Day War.

Israel considers the whole of Jerusalem its "eternal and indivisible" capital.

Silwan, part of the so-called Holy Basin around the Old City, is believed to be the site of ancient Jerusalem during the time of the biblical kings David and Solomon.

Tensions between Silwan's Arab residents and the 400 Jewish settlers living in the middle of them often erupt into stone-throwing clashes, which frequently result in the arrest of Palestinian youngsters.

Last May an Israeli court had temporarily blocked plans to demolish 22 homes in Silwan to make way for the Jewish biblical park.

The mayor of Jerusalem has been pushing a controversial major re-zoning program for east Jerusalem, which includes demolishing several homes, a move that has been fuelling tensions in the Holy City.