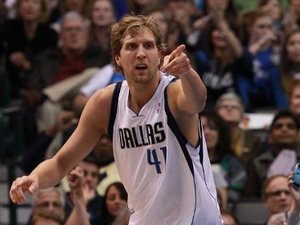 Dirk Nowitzki scored 22 points and the Dallas Mavericks stretched their NBA win streak to four games with a 96-92 victory over the Los Angeles Clippers.

Shawn Marion added 16 points for the Mavericks while Delonte West, Brendan Haywood and Vince Carter each contributed 10. The team improved to 18-11, 1 1/2 games behind first-place San Antonio in the Southwest division.

Caron Butler scored a game-high 23 points for the Clippers while Blake Griffin added 20 and Chris Paul contributed 16 as Los Angeles saw their record fall to 17-9, third in the Western Conference.

The Mavericks led 55-47 at half-time before the Clippers rallied for a 76-74 lead entering the fourth quarter, with Butler scoring 10 points in the third quarter to spark the visitors.

Reserve Jason Terry's layup gave the Mavericks an 88-84 lead and Nowitzki added two free throws with 91 seconds to play to give Dallas a six-point advantage.

Griffin answered with a dunk as part of a three-point play with 84 seconds remaining to pull the Clippers to 90-87 and Kenyon Martin added a layup with one minute to play to trim the Dallas lead to a single point.

Nowitzki answered with a baseline jumper and, after a foul on Paul, the German star added two free throws for a 94-89 Mavericks' lead with 21 seconds on the clock.

Paul sank a three-pointer to pull the Clippers to 94-92 with 17 seconds remaining and stole the ball from Jason Kidd to give Los Angeles a final chance.

But Butler missed a three-pointer with 3.9 seconds to play and West added two free throws for Dallas to create the final margin.