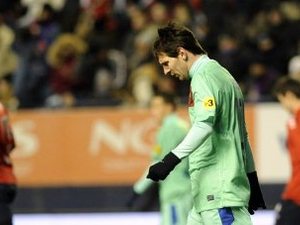 Holders Barcelona face Bayer Leverkusen in the Champions League on Tuesday on a desperate mission to save their season from falling apart.

Pep Guardiola's side find themselves a massive 10 points behind Real Madrid in La Liga after their shock 3-2 defeat at Osasuna on Saturday with his decision to put his faith in youth back-firing as he left stars Xavi Hernandez, Andres Iniesta, and Cesc Fabregas on the bench with Leverkusen in mind.

Leverkusen won all of their three home games in the Champions League's group stages, but halting a Barcelona team which averaged four goals per away match is a tall order for Robin Dutt's side, who are sixth in the German league.

Group H winners Barcelona scored 12 goals in their three away games and have lost just one of their last nine European fixtures on their travels.

"Win the title? Well, we will try to defend our Champions League crown and then attempt to negotiate each match in La Liga," said Guardiola whose side will host the second leg of the last 16 tie at the Camp Nou on March 7.

The reigning La Liga and Champions League winners have struggled on their travels this season with just four league wins on the road and succumbed to their second defeat on Saturday.

But despite their away woes, Barcelona should have few problems against a Leverkusen team which has won just one of its last five games and has injury concerns.

The Germans are bidding to reach the last eight for the first time since 2001/02 when they advanced to the final before losing to Real Madrid, but will need to pull off a huge upset if they are to progress.

Dutt has had to cope with the loss of squad members midfielder Sidney Sam and Swiss striker Eren Derdiyok through injury in recent weeks.

Ex-Germany captain Michael Ballack is definitely out after the 35-year-old pulled up in training with a torn calf on Sunday.

It completed a miserable weekend for Ballack after he was left on the bench for the third match running.

Leverkusen are 10 points off fourth place in the Bundesliga, which guarantees a Champions League place for next season, and there is already an air of resignation as their European campaign seems soon to be over.

"We are not dreamers," said Rudi Voeller, Leverkusen's director of sport, after the defeat at Dortmund when asked about Champions League football next season.

"The gap is already too big. Our goal now must be to secure a Europa League place for next season."