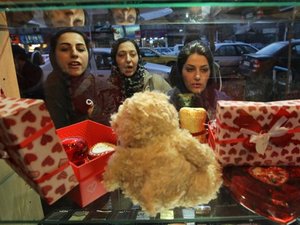 Iran may reject Western influences, but Valentine's Day has become a growing phenomenon thanks to the romantically minded youth of the Islamic state's affluent classes.

Although the ruling clerics and hardline politicians have been waging a campaign against what they call "decadent" cultural imports, the Christian day dedicated to amorous displays has so far survived.

Part of the reason could be the sheer number of young adults in the country: 60 percent of the 75 million-strong population is under 30, and one Iranian in three is aged 15 to 30.

With many of them unmarried, and with bars, clubs and mixed parties all banned under the country's strict laws, Valentine's Day is increasingly seen as a tolerated courting opportunity -- one whose commercial side is much appreciated by Iranian retailers.

Several shopkeepers in Tehran told Agence France Presse that demand for rose bouquets, sentimental cards with the English word "love", chocolate, perfume and even teddy bears was strong, adding to a growing trend of recent years.

The owner of one Italian restaurant, who asked not to be identified, said his establishment was booked up well in advance by couples.

Elmira, a 24-year-old architecture graduate in the capital who declined to give her last name, said most of those participating in the annual romantic ritual were young people from the middle and upper classes.

"The usual routine each year is an exchange of gifts and then going out for dinner," she said.

Valentine's Day "used to be huge for me," she said, but now she was looking for something more meaningful. "Silly traditions do not really matter if there are no feelings involved."

There are signs, however, that the authorities' patience with the day is wearing thin.

Last year, officials banned the production and sale of Valentine's Day items. Conservatives insist there is no room for such immodest declarations in devout Islamic culture.

They have become alarmed at the rapid decline in the number of marriages in recent years, blaming the trend on Western superficiality.

Nationalistic Iranians prefer to celebrate their love on Mehregan, a pre-Islamic and little-observed festival in October that honors Mithra, the ancient Persian goddess of love.

But so far at least, young Iranian couples are still able to take part in Valentine's Day.

Saba, an 18-year-old graphics student in the northeast holy city of Mashhad, said that for her, the day was not at all about adopting a Christian calendar but rather because "I would love to receive gifts and chocolate."

She added though that she thought it safer to attend a private party in a home than risk a restaurant or other public place which could attract unwanted attention from Iran's morality police, who enforce Islamic-based codes on dress and behavior.

"Even though we would not be doing anything un-Islamic in restaurants or cafes, there are not many places in our city to hang out on Valentine's (Day) and be safe," she said.

Even the home option is not without risk. Parties are regularly raided by the police and young Iranians consuming alcohol or dancing are arrested.

Meysam, a home appliances store owner in his early 30s, said he had plans to take his girlfriend out -- but for reasons that were not related to Valentine's Day.

"I love to have fun but I also need to do this to take my mind off (the fact) that business is just awful these days," he said.

He said he did not know what the future holds for his small business because of the continuing devaluation of Iran's currency, the rial, and added restrictions on importing goods from the United Arab Emirates and China.

Recent economic sanctions adopted by the United States against Iran's financial system have raised major hurdles to the way Iranian companies conduct their business, and impacted the import of goods into the country.

Don't worry they'll probably get stoned and the shops will be burned down for being a zionist conspiracy.