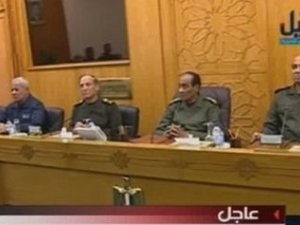 Egypt's new military rulers on Sunday suspended the constitution and dissolved a parliament dominated by the ruling party of former president Hosni Mubarak, after he was overthrown in a popular revolt.

The Supreme Council of the Armed Forces' "communiqué number five", which was read out on state television, said a transitional period of military rule would last six months while reforms were put in place to allow free elections.

The council announced the suspension of the constitution and said it would "run the affairs of the country on a temporary basis for six months or until the end of parliamentary and presidential elections."

It announced the "dissolution of the lower and upper houses of parliament" and said it would continue to issue decrees during the transitional period.

The legislative body was seen as illegitimate following elections last year that were marred by widespread allegations of fraud and gave Mubarak's National Democratic Party (NDP) an overwhelming majority.

A committee will also be formed to oversee amendments to the constitution and a popular referendum will be organized to vote on the changes, the council said, in a bid to ease restrictions on presidential candidates.

"The head of the Supreme Council of the Armed Forces will represent the council domestically and internationally," it said, stressing its commitment to international agreements.

Mubarak resigned on Friday after a 30-year-reign and handed power to the Supreme Council of the Armed Forces, a body of some 20 generals who were mostly unknown to the general public before the uprising that brought him down.

Until elections are held, the military council is the country's executive body, overseeing the caretaker government of Prime Minister Ahmed Shafiq.