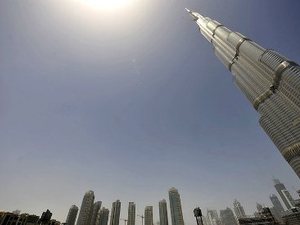 Dubai's economy will continue to grow in 2012, despite persistent contraction in its once rapidly-booming construction sector, thanks to healthy trade and tourism, an official and economists said Wednesday.

Growth in the gross domestic product of the debt-laden emirate is "expected to be over 4.5 percent this year," said Sheikh Ahmed bin Saeed Al-Maktoum, the head of the Dubai Economic Sector Committee.

The forecast by Dubai's Department of Economic Development (DED) is also around 4.1 percent for 2012.

This is a "respectable rate" driven by over six percent growth in tourism, and similar rates in trade and manufacturing, in addition to transport, said DED chief economist Mohammad Lahouel.

The growth will continue "despite a continued decline in construction," he said at the Dubai Economic Outlook 2012 forum.

Lahouel said the final figures on GDP growth achieved in 2011 were not out, though he expected they should be around three percent, while a "little bit over two percent" was achieved in 2010.

Standard Chartered's Marios Maratheftis agreed with the positive outlook for Dubai, but he put the forecast for growth in 2012 at 2.4 percent.

"We think it is good given that 2011 was a good year," said Maratheftis, the bank's head of research for Western Hemisphere.

"The fundamentals of Dubai are pretty healthy and strong. Construction will continue to be negative, but I think it is good news because focus is shifting towards productive sectors," he said.

"It shouldn't be about the rate of growth but about the quality of growth," Maratheftis added, highlighting that the retail sector "is doing well, if not booming," while hospitality is also doing very well.

Dubai's economy contracted in 2009 after being hit by the global financial crisis which dried out international finance and brought its property sector -- which grew at break-neck speed for over five years -- to a shrieking halt, shedding around 60 percent of its value so far.

But the economy has picked up pace, banking on its developed tourism and retail sectors, as well its traditional trade sector.

The property sector had led Dubai's growth, but it is now lagging behind as investors walked away from many projects after they saw the value of their investments wiped out, while plenty of residential and commercial space became available in the market.

"We have enough real estate to accommodate growth," said Marwan bin Galitha, the head of Dubai's Real Easte Regulatory Agency (RERA), while acknowledging the relegation of property from the sectors leading Dubai's growth.

He said that 220 real estate projects were progressing, declining to provide a figure for cancelled projects.

In 2010, RERA said 480 projects in the drawing stage were cancelled.

Dubai sent jitters throughout global markets in November 2009, when it said it needed to freeze payments on some $26 billion of debt owed by its largest group, Dubai World.

But the conglomerate succeeded in reaching an agreement with lenders to restructure $14.7 billion of debt.

The debt on Dubai's government-related entities is estimated at $100 billion.