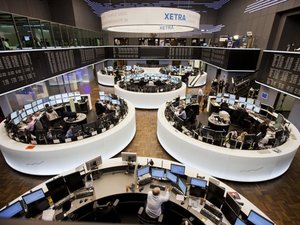 European shares rose on Wednesday as a Greek bailout hung in the balance after Eurozone finance ministers delayed a key meeting until next week but supportive Chinese comments lifted sentiment.

Equities moved higher after the head of the Chinese central bank pledged to continue buying European sovereign debt as the Asian giant seeks to shore up support for its biggest trading partner.

Meanwhile, official data showed Wednesday that the Eurozone sovereign debt crisis brought economic growth across the euro area to a standstill in the fourth quarter and even pushed a number of countries into recession.

But investors were partly comforted by better-than-expected gross domestic product (GDP) data in Frankfurt and Paris. The French economy grew by 0.2 percent in the fourth quarter, while the German economy shrank 0.2 percent.

"Despite visible signs of economic slowdown in Europe, as the fiscal belt tightening does not necessarily foster growth, and (the) Greece issue, markets were able to open higher," said Gekko Global Markets analyst Anita Paluch.

"The GDP data may not be that bad at all, pointing rather to a stabilization at lower levels than to continuous contraction, and China is willing to lend a helping hand by expanding its investments in Europe.

"Investors see past Greece as well -- as the country did not provide on time written commitments necessary in the run up to the bailout meeting, it got punished."

Eurozone finance ministers scrapped a key meeting on Wednesday after Athens failed to meet conditions set by lenders in return for a vital Greek rescue package that is needed to avoid a default.

Luxembourg Prime Minister Jean-Claude Juncker, head of the group of Eurozone finance ministers, decided to switch the meeting to a conference call instead and prepare for previously scheduled talks in Brussels on Monday.

The Financial Times newspaper, citing senior European officials, reported that Eurozone finance officials were split over the key issue of whether Athens should be trusted at all with a second bailout.

The Eurozone had demanded that Greece's finance minister come to Brussels on Wednesday with an extra 325 million euros ($425 million) in budget cuts and written pledges from politicians to implement EU-ordered austerity measures.

"All of this adds to uncertainties as to whether will Greece will get the bailout package, thus increasing the probability of a default," said VTB Capital economist Neil MacKinnon.

"Supportive comments from the Chinese authorities as regards the euro are being interpreted positively though actual monetary support is being overstated in our view."

"As Premier Wen Jiabao said yesterday at the China-EU summit, China will... continue to invest in European government bonds and will continue... to get more involved in solving the European debt crisis," Zhou said.

The Greek parliament approved 3.2 billion euros in cuts on Sunday despite protests and riots in the streets of Athens, as Greek workers were hit by a 22-percent cut in the minimum wage.

"It appears that the risk of a more disorderly default for Greece is rising," said economist Lee Hardman at The Bank of Tokyo-Mitsubishi UFJ.