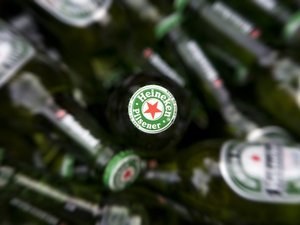 Dutch brewing giant Heineken announced a 1.2-percent dip in net profit for 2011, saying on Wednesday it expected input costs to rise on a surge in the price of a main ingredient, barley.

The figures were better than expected, with analysts on Dow Jones Newswires forecasting profits of 1.41 billion euros and revenue of 16.99 billion euros.

The company, Europe's largest brewer and one of the world's top five, said it sold 213.9 million hectoliters of beer in 2011, an increase of 3.6 percent from output in the previous year.

"At the start of 2011, we said we would significantly increase investment in our brands and innovation to drive long-term value and volume growth," Heineken's chief executive Jean-Francois van Boxmeer said.

"This strategy helped us to deliver organic volume and revenue across all five reporting regions for the year," Van Boxmeer said in the statement.

But it expected a six-percent increase in input cost per hectoliter this year.

This was "primarily reflecting higher pricing for malted barley," the company said, adding it "expects to mitigate this through the implementation of planned revenue growth initiatives... and ongoing efficiency programs".

The brewer said it had saved 614 million euros over the last three years through a cost reduction program, with a second planned between 2012 and 2014 expected to save the company 500 million euros.

Heineken said it would propose a total cash dividend of 0.83 euros per share of 1.60 euros nominal value for 2011, to be proposed to an annual meeting of shareholders in April.

Heineken was founded in the nineteenth century in Amsterdam and produces and sells over 200 brands of beer and cider including Heineken and Amstel beer and Strongbow cider. The group employes over 70,000 people worldwide.