Messi Happy to Put Barca on Verge of Last Eight 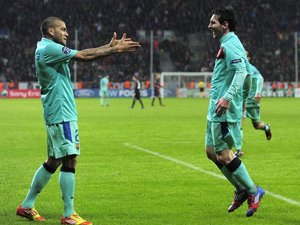 Superstar Lionel Messi admitted he was relieved to leave here with the 3-1 win over Bayer Leverkusen which puts Barcelona on the verge of the Champions League quarter-finals after the Round of 16, first-leg clash.

Holders Barcelona took a giant step towards the last eight on Tuesday with a convincing win following a slow start as maestro Messi put in an impressive display after a quiet first half in this David versus Goliath clash.

Goals either side of half-time from Chile's Alexis Sanchez put Barcelona into the lead before Messi claimed a late strike after converting a Dani Alves cross having initially set the Brazil defender free.

After Czech Republic defender Michal Kadlec had put Leverkusen level with a well-timed header at the start of the second-half, the hosts squandered chances to earn a draw before Messi's 88th-minute goal put the result beyond doubt.

"It was important for us to win this match, because under Pep (Guardiola the coach) we have never won the first match in the Round of 16," said Messi ahead of the return leg at the Nou Camp on March 7.

"We knew it would be complicated to play against the Germans.

"It's always nice to score a goal, but the important thing was the result for the team."

It was Messi's defense-splitting pass which led to the first goal as Alves and Sanchez sprinted side by side after the ball and it was the Chilean who arrived first to fire past Leverkusen goalkeeper Bernd Leno on 41 minutes.

Despite a plucky display by the hosts, Barcelona simply had too much quality in their ranks to be held up by the Germans.

"I think the second half was good, we used the space better after we took the lead," said Guardiola.

"We tried to improve our game, we had a few chances in the first half, but perhaps the final pass was missing.

"We can be happy with the performance we put in today, we have given ourselves a good chance now for the return leg.

"We know that the Germans play a good long-ball game, they use their height and Leverkusen really came at us in the second half and we know we have to be careful in the second leg."

Despite Barcelona dominating possession, Leverkusen fought until the final whistle and coach Robin Dutt praised his team, who have now won just one of their last eight games.

"The defense was good in the first half, but we were lacking a bit of courage," said Dutt.

"We gave them too much respect and were a bit anxious.

"It was a completely different story in the second half when we played our part in the game and caused Barcelona some problems."