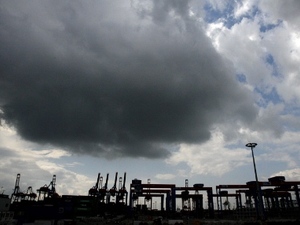 The Eurozone debt crisis brought the German economy, Europe's biggest, to a standstill at the end of last year, data showed Wednesday, but the pause in growth will prove only temporary, analysts said.

According to preliminary figures from the national statistics office, Destatis, gross domestic product (GDP) contracted by 0.2 percent in the fourth quarter of 2011 compared with the preceding three months.

That was fractionally better-than-expected -- analysts had been penciling in a contraction of around 0.3 percent.

A precise breakdown of the growth data will be published next week but exports -- traditionally the engine of the German economy -- appeared to have been hit by the long-running debt crisis in the single currency area.

"The German economy suffered a small setback at the end of 2011," Destatis said in a statement.

"Foreign trade had a negative effect on the economy in the final quarter of 2011. But consumer spending also declined slightly."

The only positives came from investment on a quarter-on-quarter basis in the period from October to December, with construction investment, in particular, much higher than in the third, Destatis said.

Last month, the statistics authority had estimated that GDP likely contracted by around a quarter of percentage point in the fourth quarter as the debt crisis slammed the brakes on growth.

Analysts predicted that the lull in growth at year-end would likely be short-lived.

The dip in GDP was "not as deep as expected, confirming that the German economy only took a growth pause and is not approaching a new recession," said Carsten Brzeski, economist at ING Belgium.

"Of course, a quick rebound is not (automatic) and the big unknown for the German economy remains the sovereign debt crisis. One thing, however, is obvious -- today's numbers are no reason at all to start singing swan songs on the German economy," Brzeski said.

Among the reasons pointing to an early return to growth was the low risk of a credit crunch, the analyst argued.

Contrary to many European peers, German banks have not tightened lending conditions, at least for now, he said.

Low inventories and a still high backlog of orders would act as "an important safety net for industry, ensuring production even if demand for German products would weaken," he said.

Many of Germany's most important trading partners are outside the Eurozone so exports could benefit from a pick-up elsewhere even if Europe slips into recession.

Finally, a sound labor market would ensure that domestic demand, which has actually taken over from exports as the main driver of growth, would remain strong, the analyst said.

It was "the first contraction in activity since early 2009 and -- in our view -- just a one-off event," the analyst said, predicting a "modest improvement already in the first half."

The "solid structure of the economy is acting as a cushion to external shocks and there are no major risks of a deep recession," she said.

"The latest broad-based weakness in the official figures does not herald another negative quarter or even a deeper recession," he said.

Although downside risks from the debt crisis persist, and the recent very cold winter weather could also weigh on growth in the first quarter, "we're sticking to our quarterly growth path for this year, with an increase of 0.2 percent in the first quarter and a further moderate pick-up afterwards," Koch said.