Arsenal Star Henry Hoping to Go Out with a Bang 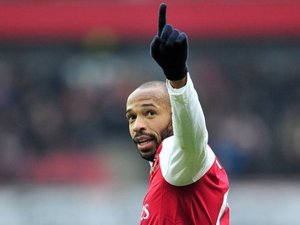 Thierry Henry will be looking to give the club he loves a farewell gift as he makes his final appearance for Arsenal against AC Milan in the Champions League on Wednesday.

Henry's second spell at the North Londoners is set to come to an end on Thursday when he will return to the New York Red Bulls in Major League Soccer.

And having bowed out of his Premier League commitments on Saturday with a vital winning goal at Sunderland, Henry will be hoping to leave an equally lasting impression at the San Siro.

These two sides meet at this stage of the competition for the second time in four years.

Back in 2008/09 Milan came away from the Emirates with a goalless draw but two goals in the final six minutes in Italy from Cesc Fabregas and Emmanuel Adebayor saw Arsenal triumph 2-0 on aggregate.

That was the start of a miserable run for the rossoneri who were also knocked out at the second round stage by English opposition in the next two years with Manchester United and Tottenham both winning at the San Siro as well.

Until that juncture Milan had never lost at home to an English side but now they will be looking to end this run of three successive reverses.

And they will have to keep an eye on Henry who at 34 proved during his six-week spell with Arsenal that he can still cut it at the top level, even though he was mostly used as a substitute.

Having twice already been a match-winner for the Gunners in the last six weeks, French manager Arsene Wenger is hoping his compatriot has one more trick up his sleeve before he leaves.

"I hope he will add some more (goals) in the Champions League on Wednesday. Certainly he got us the three points in a very difficult game (at Sunderland)," said Wenger.

Arsenal may be boosted by the Frenchman's presence but Milan are also looking set for an increase in playing resources.

Star forward Zlatan Ibrahimovic returns to the team after a domestic suspension while Kevin-Prince Boateng, Alessandro Nesta, Mathieu Flamini and Pato have all resumed training with their team-mates following injuries.

The return of Boateng is particularly welcome given how his forward thrusts from midfield have been missed.

More important than that for coach Massimiliano Allegri, though, has been Milan's improved fighting spirit.

Until Saturday's 2-1 win at high-flying Udinese Milan had gone three games without a win, surrendering meekly to Lazio in the league and Juventus in the Cup along the way.

But in Udine at the weekend, Allegri was a far happier man.

"The spirit is what made the difference. When we have the right nastiness we don't concede goals," he said.

"We saw that from the last piece of action at a corner where we had the desire to get rid of the ball."

Milan will have to be alert at the back, particularly against a forward line that knocked seven goals past Blackburn recently and for whom Robin van Persie has been in clinical goalscoring form with 22 league strikes already this season.

In truth Milan have shored up a backline that was leaking goals alarmingly at the beginning of the campaign, drawing chief executive Adriano Galliani to publicly rebuke his coach and tell him that the best defense usually wins the league.