No Panic for Loew as Mertesacker Joins Injury List 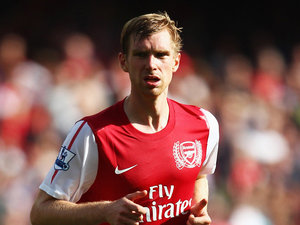 Arsenal defender Per Mertesacker has become the fourth Germany star forced out of the pre-Euro 2012 friendly against France because of injury, but coach Joachim Loew insists he is staying calm.

The towering centre-back picked up an ankle injury in the Gunners' 2-1 victory at Sunderland last Saturday and posted a picture of his swollen ankle on his Facebook page.

He looks to be out for several weeks and joins Bayern Munich's Bastian Schweinsteiger (ankle), Dortmund's Mario Goetze (groin) and Cologne's Lukas Podolski (foot) on the casualty list for the coming weeks.

Germany host France in Bremen on February 29, but national coach Loew is relaxed about losing four of his first-choice team four months before the start of Euro 2012, to be co-hosted by the Ukraine and Poland.

"There is no panic when we hear of a new injury," said Loew.

"The clubs need to worry more than I do, at the moment.

An injury break at this part of the season could prove to be a blessing in disguise to keep Germany's stars fresh for the European Championships and Loew said only torn ligaments or broken bones give him real cause for concern.

He will nominate his squad on February 22 and it is his only chance to look at options before naming his 23-man squad in early May for Euro 2012, but all four of the injured quartet are sure to travel.

Schweinsteiger looks like facing the longest spell on the sidelines after damaging ankle ligaments and is expected to return in mid-March.

Poldolski is expected to be available for Cologne at the end of February.

France have drawn England, co-hosts the Ukraine and Sweden in Group D, while Germany are up against Portugal, Denmark and the Netherlands in Group B with Euro 2012 to kick-off on June 8.