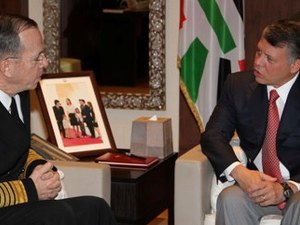 The king and U.S. Chairman of the Joint Chiefs of Staff Mike Mullen "discussed bilateral cooperation and a number of issues of common concern," a brief palace statement said without elaborating.

On Monday, Mullen is due to hold talks in Israel with Prime Minister Benjamin Netanyahu, President Shimon Peres and the country's military leaders.

Pentagon spokesman Captain John Kirby said on Friday Mullen would discuss "security issues of mutual concern and reassure both these key partners of the U.S. military's commitment to that partnership."

The visit comes after Mubarak stepped down Friday after 30 years, handing power to the military after more than a million people took to the streets in the culmination of an 18-day uprising in Egypt.