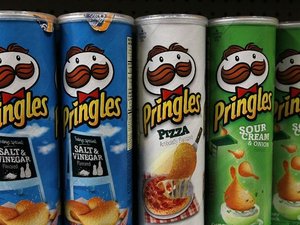 The all-cash deal came after a plan to sell Pringles to Diamond Foods was scotched amid a Securities and Exchange Commission probe into another side of Diamond's business.

"Pringles has an extensive global footprint that catapults Kellogg to the number-two position in the worldwide savory snacks category, helping us achieve our objective of becoming a truly global cereal and snacks company," John Bryant, Kellogg president and chief executive, said in a statement.

Pringles, the saddle-shaped potato crisps stacked in a canister, has $1.5 billion in sales across more than 140 countries. The business has manufacturing operations in the United States, Europe and Asia.

Kellogg's brands include Corn Flakes, Keebler, Eggo and Cheez-It. The deal is expected to be completed by mid-2012, subject to regulatory approval.

P&G and Diamond Foods announced Wednesday they had mutually agreed to end Diamond's proposed acquisition of Pringles announced in April 2011.

That deal ran aground late last year after the SEC launched a probe of Diamond's payments to walnut growers.

Diamond announced on February 8 that an internal audit had found accounting errors in the payments and they were taking corrective actions.

Investors applauded the Kellogg deal, sending its shares up 3.9 percent in opening trade Wednesday. P&G was up 0.4 percent.

The Pringles crisps/chips are totally unhealthy. The are made with vegetable oil. Being vague about it means it's made of palm oil.... The worst ever. Not only it isn't ecological (bu right, who cares about this aspect in Lebanon!?) and it fills the body's main arteries with thick fat. By the way, why are African "mamas" so fat? Because they mainly use this to cook. À éviter d'urgence!!!