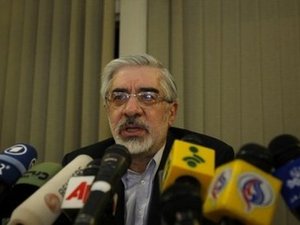 Iranian police Monday blocked access to the house of opposition leader Mir Hossein Mousavi and cut his telephone lines to prevent him attending a rally in support of Arab revolts, his website said.

"Security forces have sent police vans and vehicles to the alley where the house of Mr. Mir Hossein Mousavi and his wife Zahra Rahnavard is located" in Tehran, Kaleme.com reported.

"From today the police have blocked the alley where their house is located...There is no possibility of coming and going" to the house, it said.

The report said all telephone lines at the house, including the mobile phone connections of Mousavi and his wife, have been severed.

Kaleme.com said the latest "illegal and restrictive measures and pressures were adopted to prevent Mousavi from taking part in a rally in support of the people of Tunisia and Egypt."

Mousavi and fellow opposition leader Mehdi Karroubi had sought permission from Iran's interior ministry to hold a rally on Monday to express their solidarity with uprisings in Tunisia and Egypt.

Iran has backed the Arab uprisings but the interior ministry refused to permit the opposition rally as officials believe it is a ploy to stage fresh anti-government demonstrations as seen in 2009 after the disputed re-election of President Mahmoud Ahmadinejad.

Despite the ministry's refusal, several groups claiming to be linked to the opposition movement have said they will stage a rally later Monday to support Arab uprisings.

Karroubi himself has been under a de facto house arrest for almost a week with his family and relatives barred from visiting him.