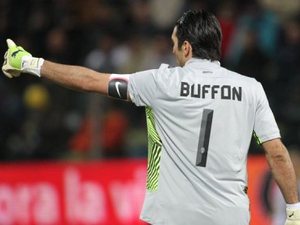 Juventus missed the chance to retake the lead in Serie A as Parma held them to a 0-0 draw on Wednesday.

AC Milan had gone top with a 2-1 win at Udinese on Saturday but the draw, Juve's 10th in 22 league games this season, left them a point behind the rossoneri.

They still have a game in hand, though, and did at least maintain their unbeaten run this season, extending it to 25 matches in all competitions.

Juventus dominated the first half and should have had an early lead.

Giorgio Chiellini got up to meet Andrea Pirlo's free-kick but his header bounced off the base of the post.

The rest of the half involved lots of Juve probing but few concrete chances.

Arturo Vidal looped a high ball into the box and Alessandro Matri got up to meet it but his header lacked power.

Pirlo came inches away from producing something special but his free-kick from 20 yards flew just past the post.

Mirko Vucinic beat a man on the edge of the box with a clever jink but his finish was woeful while Matri burrowed into the area only to overrun the ball allowing Nicola Pavarini to come out and smother the ball.

Parma came out with more purpose after the break and created their first chance as former Juve forward Sebastian Giovinco, following a swift counter, forced Gianluigi Buffon into a sprawling save.

The whole second period took on a different shape, with Parma far more positive and Juve struggling to create anything of note.

Giovinco looked the most dangerous player on the pitch after the break but too often seemed to go to ground rather than head for goal.

Juve started to click towards the end of the game but still couldn't find the breakthrough.

Pirlo hit one from distance that had Pavarini bundling the ball behind while Claudio Marchisio fizzed a shot just past the upright.

Six minutes from time Juve should have won it as Pirlo dinked the ball over the top but Pavarini made a vital stop to deny Emanuele Giaccherini.

In the day's other game Guido Marilungo scored the only goal as Atalanta beat Genoa 1-0 in a mid-table battle.