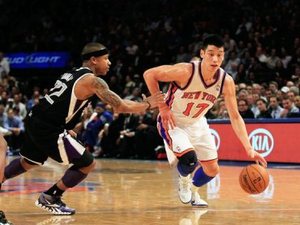 Jeremy Lin ignited a balanced New York attack with a career-high 13 assists as the Knicks stretched their NBA win streak to seven games with a 100-85 victory over Sacramento.

"Linsanity" continued at Madison Square Garden as Lin, the first U.S.-born NBA player of Taiwanese and Chinese heritage, continued a magical run that has seen him rise from the Knicks bench to become a global sensation.

"It's just crazy," Lin said of his fairy-tale NBA fortnight. "We just came out with a lot of energy. Thanks to the fans for all the energy they have given us. Now we are riding the momentum. It has been fun."

Knicks supporters chanting "M-V-P" for Most Valuable Player as Lin spoke to the crowd through a microphone after the victory, in which he played only 26 minutes but showed he can adapt to setting up teammates as well as scoring.

Lin scored 10 points on 4-of-6 shooting from the field and 2-of-3 accuracy from the free throw line, but also committed six turnovers.

"It's something I've got to work on because my turnovers are sky high," Lin said. "I've got to look on the film and work on that. I have learned a lot (in the past two weeks).

"I'm still making a lot of mistakes but being able to play through that, grow as a player and build on my confidence, was the best thing that could have happened to me."

Lin's career-best assist total, however, played the crucial role, his distribution allowing teammates to shine and the Knicks to reach 15-15 for the season.

Landry Fields scored 15 points to lead the Knicks while Steve Novak and Bill Walker added 14 each, Amare Stoudemire and Iman Shumpert added 11 each and Jared Jeffries joined Lin on 10 points.

"I just tried to move the ball around. When we have guys like Amare and Landry, I just throw the ball up and they go and get it. They make me look good."

Knicks coach Mark D'Antoni was impressed that Lin showed he could adapt his game to a supporting role when needed as well as a playmaker role such as the one he had in scoring more than 20 points in games earlier in the win streak.

"That's where he will make his most progress, just reading the situation, finding the scorer and scoring," D'Antoni said. "I'm really happy -- 10 points, 13 assists, that's great.

"The next night he might have to score 30 for us to win. But that's great."

D'Antoni was not worried about how Lin might be challenged physically during the stress of a 66-game NBA season compressed into four months due to a lockout last year.

"He's 23 years old. He should be able to go forever," D'Antoni said. "That shouldn't be a problem but we will watch him, talk to the trainers, make sure he's OK, that he stays fresh."

Lin, a Harvard University economics graduate, was cut by Golden State and Houston last December before being picked up by the Knicks.

With Stoudemire absent following the death of his brother in a car crash and Carmelo Anthony sidelined by a groin injury, the Knicks turned to Lin last week on an emergency basis and he responded in amazing fashion.

Lin averaged 23.3 points and 7.4 assists in his first five games, the top scoring total by any player since 1976 in his first five starts, a run to outdo such stars as Michael Jordan, Kobe Bryant, LeBron James and Shaquille O'Neal.

"All of a sudden this young kid comes in and there's life inside the Garden," said Knicks big man Tyson Chandler. "He is the most humble kid in the world and everybody is excited to play with him."

The major concern now for Knicks fans is how Lin will adapt once Anthony returns, something expected later this week. Lin's passing performance against Sacramento eased worries that Anthony might disrupt the magic.

"When Carmelo gets back, it's only going to make the team better," Chandler said.

Tyreke Evans scored a game-high 19 points to lead the Kings in a losing cause.