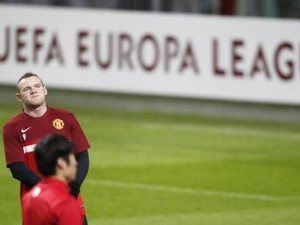 The city of Manchester were hoping to see their two football sides fight out the Champions League final, but instead on Thursday both sets of fans will have to make do with the lesser fare of the Europa League.

However, both face tricky second round ties if they are to progress a step closer to the final on May 9 in the mundane surroundings of Bucharest rather than the glamour of the Champions League final in Munich on May 19.

Bigspending City - who finished third in a tough Champions League group behind Bayern Munich and Napoli - have to travel to defending champions Porto in Portugal while United, who surprisingly finished below Benfica and Basel, are away at Dutch giants Ajax.

City manager Roberto Mancini insists that he will select a strong side to play the Portuguese champions, whose high standards of last season when they were all but unbeatable domestically and in Europe have slipped and they trail Benfica by five points in this term's title race.

Indeed while the Premier League title remains the Italian's top target he is also looking to add some European silverware to the trophy cabinet and with City having lost out on retaining the FA Cup the Europa League has taken on added importance.

"I will play a strong team against Porto. We want to win the Europa League because it is an important trophy," Mancini told the Sunday Mirror.

"We have no game next week (having been knocked out of the FA Cup) so we can concentrate fully on a good performance. It will be difficult to go through because Porto are a top team, but we want to do the best we can in this competition.

"We were disappointed not to do well in the Champions League, but it was a difficult group and we were unlucky to go out with 10 points.

"Now our concentration is on the Europa. It is a long time since Manchester City won a trophy in Europe (their one and only win the now defunct Cup Winners Cup in 1970).

"Last season we won the FA Cup after a long time and winning a European trophy would be a big step for the club," added Mancini, who as a player scored the only goal in his side Sampdoria's Cup Winners Cup quarter-final at Porto in the 1994/95 season.

Porto, though, will fancy their chances of coming out of it best as they are unbeaten in seven home European matches while City have just one win in their last seven away trips in Europe.

United perhaps face an easier task as they play an Ajax side a long way short of the quality that dominated Europe in the 1970's and who won the Champions League title most recently in 1995.

However, Sir Alex Ferguson will still send out a top quality side on Thursday and believes that Portuguese star Nani and English defender Phil Jones will also get a run out after recovering from injuries.

"I'm definitely treating it seriously," said Ferguson, who is seeking to make it a full house of European trophies having won the 1991 Cup Winners Cup with United and subsequently two Champions League trophies.

"The thing is to look forward to it. It's still European football and still a good standard.

"I think it's amazing that, in the 55 years we've been involved in Europe, we've never played Ajax. When you think of all the draws that have been made, the quarter-finals and the groups, we've never drawn them.

"It'll be a full house too with a great stadium and a great pitch. They're not having a great time at the moment but I think, playing United, they will be well motivated for it and always play nice football too."

Ferguson's Ajax counterpart former Dutch playing great Frank de Boer has not given up hope of winning the league title despite them being eight points off leaders PSV Eindhoven.

However, were they to claim the scalp of United it would trump even winning the league crown.

"Two clubs with masses of history and a rooms full of European Cups - this tie is worthy of the Champions League," he said.

"We know they are the toughest team to beat but we are relishing it."