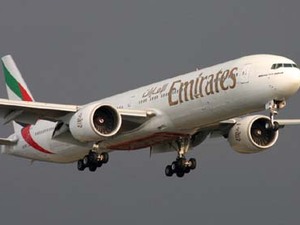 A Boeing Emirates 777 traveling from Dubai to New York with 361 passengers on board made an emergency landing in Stockholm early Monday after smoke was detected in the cabin, an airport spokesman said.

"They had an indication of smoke in the cabin ... It could have been someone smoking in the toilets," Anders Bredfell of Stockholm's Arlanda airport told Agence France Presse.

The plane landed around 7:00 a.m. (0600 GMT) but the pilot "didn't want to evacuate the plane right away on the tarmac using the slides," he added.

Passengers disembarked normally and waited inside the airport while technicians inspected the plane.